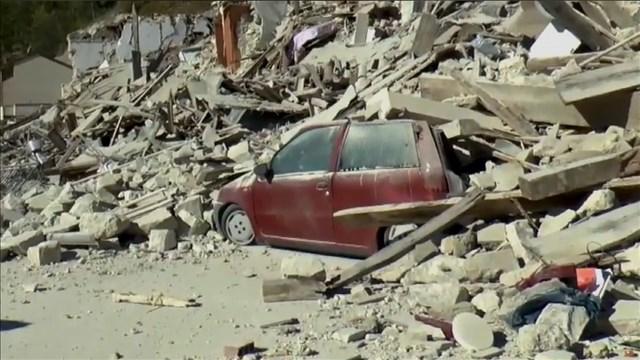 Editor's note: Are you in Italy? How has the earthquake affected you? If it's safe for you to do so, WhatsApp us on +44 7435 939 154 to share your photos, experiences and video. Please tag #CNNiReport in your message.

(CNN) -- More than 15,000 people are being housed in temporary shelters after a powerful earthquake on Sunday jolted central Italy, a region battered by repeated tremors since August.

Dramatic images from the disaster zone show villages that appear entirely flattened, with historic buildings, including churches, crumbling when the quake struck 10 kilometers below the earth's surface.

Remarkably, there have been no reports of deaths from the 6.6-magnitude quake -- the strongest to hit the country in more than three decades -- as many of the towns had been evacuated following a devastating earthquake in August, which killed almost 300 people, as well as a string of tremors earlier last week.

Titti Postiglione, spokeswoman for Italy's Civil Protection agency, told reporters Monday that the number of people in temporary shelter was expected to grow as the agency continued its work in affected areas.

"We are working under extremely difficult conditions," she said. "The roads were already compromised after the previous quakes and now they're even worse."

The region is also being rattled by frequent aftershocks, creating a risk of falling debris for rescue workers to contend with.

Of the 15,000 people receiving shelter, more than 4,000 have been placed in hotel rooms on the Adriatic coast, while 10,000 are in temporary shelters in the regions of Umbria and Marche.

Daniele Gatti, director of the Holiday Hotel in Porto Sant'Elpidio on the Adriatic Coast, said 500 people displaced by the earthquake were staying at the venue, including many elderly people and children.

"People arrived yesterday in very traumatic conditions, but they seem to be doing better now as they are fitting in the place," he said. He said he had heard that the displaced people could be there for up to six months.

More than 1,100 additional people are still in shelters from August's quake in Amatrice, not far from the site of Sunday's tremors. The true number of displaced since then, however, is believed to be much higher, as many victims have taken shelter with family or friends.

Mayor: We must 'start from scratch'

The deadly quake in August caused severe damage across several towns in central Italy, and Sunday's tremor brought down some of the weakened structures left standing.

It destroyed part of the remaining bell tower in Amatrice, which stood above the rubble as a symbol of hope in August's devastating quake.

"We will have to start from scratch," Michele Franchi, the deputy mayor of Arquata del Tronto, one of the towns hit by the quake, told Italy's Rai television.

The biggest historic loss Sunday was the Basilica of San Benedetto in Norcia, which many residents consider to be the heart of the city. It collapsed after the quake, leaving only its façade and the back part of its foundation intact.

'At their wits' end'

Many communities in central Italy are tiring of the quakes, and some are refusing to leave. Some residents slept in their cars over the weekend through the tremors.

"Everyone has been suspended in a never-ending state of fear and stress. They are at their wits' end," Bishop Renato Boccardo of Norcia told Reuters.

The quake was felt as far north as the Alps, Curcio said, and as far south as Rome, some 90 kilometers (56 miles) away. The metro in Rome has been shut down as authorities continue to survey the area, municipal officials said.

Schools in Rome are closed Monday so buildings can be surveyed for any structural damage, according to the site of Rome's municipal government. Several buildings have suffered minor damage from the series of earthquakes.