Head Coach Bobby Barnes was hired to lead the team in its first season competing in the Chicagoland Conference of the NAIA.

“It’s been a crazy, hectic process. It’s been exciting. With a school of about 5,000 plus students, there’s a wealth of soccer talent here in the area, which has been tremendous,” Barnes said.

A majority of the players are natives of Michiana. The team’s captain, defensive player Julia Adams, doesn’t travel far from her hometown in North Liberty to the team’s home field at Newton Park in Lakeville. 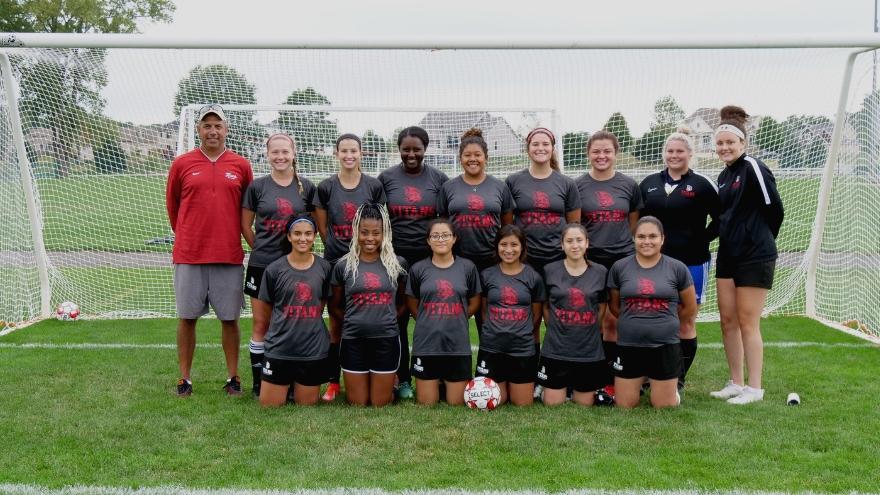 The inaugural IUSB women's soccer team at a practice on their home field at Newton Park in Lakeville.

“After high school was over, I really missed playing soccer for one year and when I heard that they had this amazing opportunity I thought why not give it a shot even if it’s just for a couple of years I thought might as well enjoy doing soccer again,” Adams, a second year nursing student, said.

Barnes says the team is comprised of varying soccer abilities, but he sees improvement already after a short preseason and first game against Saint Mary’s College.

While the Titans lost to the Belles 8-0 on Saturday, the team is already looking towards their next lineup of games, ready to take on the challenges that come along with being a new team.

“We fought the whole way and had a great crowd. It was a lot of fun to get the program and season going this weekend,” Barnes said following their first game.

Adams says that despite being thrown together for the first time just a few weeks ago during the preseason, the team already feels like a family.

“We feel the pressure to do well, to be the first team and it’s just a really exciting opportunity and we want to prove to our school that we have a soccer program and we want to do good this year,” Adams said.

And like many Michiana collegiate teams, the IUSB women’s soccer team is already looking towards making a positive impact on the community. Barnes says he has already starting planning youth workshops and community events.

“I think one of the biggest things, even kind of part of our team ethos will be giving back to the community,” Barnes said.