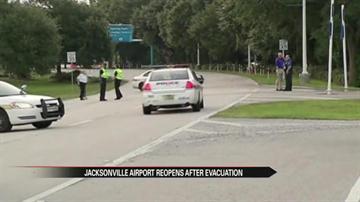 JACKSONVILLE, Fla. — The Jacksonville International Airport is back and up running. Suspicious packages forced officials to shut it down for nearly five hours on Tuesday.

Incoming plane loads of passengers were stranded on the tarmac. And outgoing flights were delayed.

Police found two suspicious packages, one of which was deemed "destructive." And it had to be deactivated off-site.

"It was a device that certainly had a destructive nature to the degree that it needed to be taken off off-site to be rendered safe, which is what we did," said Shannon Hartley of the Jacksonville Sheriff's Office.

Passengers on inbound flights were bused to off-site hotels.