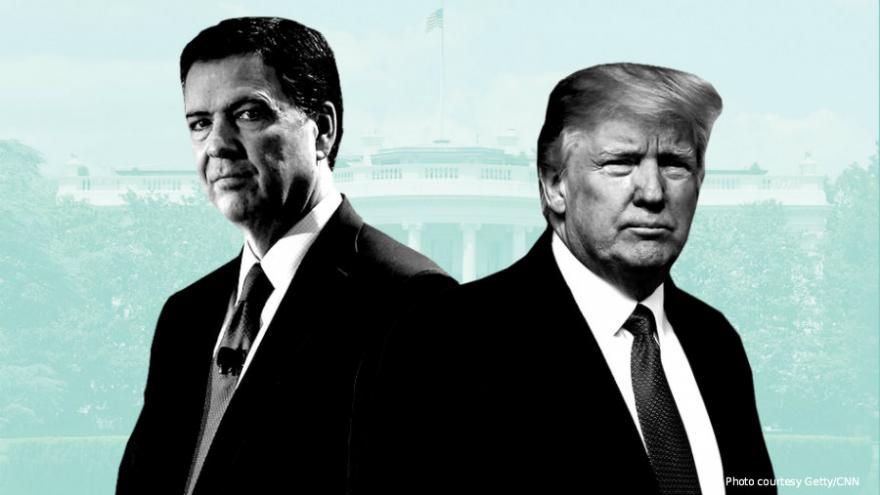 CNN obtained a copy of the book and corroborated news reports about Comey's highly anticipated recounting of his time in the Trump administration.

Comey's recollections detail what he calls Trump's "mob"-like approach to leadership and take aim at the President's disposition, which he says created "the forest fire that is the Trump presidency."

"This President is unethical, and untethered to truth and institutional values," Comey wrote. "His leadership is transactional, ego driven and about personal loyalty."

Comey went on to deliver blockbuster testimony before the Senate Intelligence Committee, where he accused the President of lying about their interactions.

In his book, Comey wrote about Trump's concern over allegations about blackmail and prostitution contained in an opposition research dossier on Trump written by ex-British intelligence office Christopher Steele, which Comey said the President referred to as "the golden showers thing."

News of the book's contents Thursday set into motion Comey's expected reemergence in the public eye, ahead of his upcoming book tour.

'Flashbacks' of the mob

Comey, a former prosecutor, said in the book that he saw much in common between Trump and the mob bosses he had pursued in a past life.

Comey wrote in one passage that Trump gave him "flashbacks to my earlier career as a prosecutor against the mob."

"The silent circle of assent," Comey described. "The boss in complete control. The loyalty oaths. The us-versus-them worldview. The lying about all things, large and small, in service to some code of loyalty that put the organization above morality and above the truth."

He even drew parallels between a visit to Trump Tower and New York Mafia social clubs he'd seen in the 1980s and 1990s.

Comey portrays President as a bully and a liar who sought to muscle federal investigators like himself.

"What is happening now is not normal," Comey wrote.

Comey found Trump obsessed with the prostitution allegation, saying that Trump spoke to him on four separate occasions to deny the claim.

Comey said Trump called him on January 11, 2017, to explain away the claim.

"'I'm a germaphobe,'" Comey quoted Trump saying. "'There's no way I would let people pee on each other around me. No way.'"

Trump lashed out at the reports in a news conference in January 2017, saying, "It's all fake news. It's phony stuff. It didn't happen."

Comey said on the fourth occasion Trump brought up the allegation -- during a March 30, 2017, call -- the President mentioned that the situation was difficult for first lady Melania Trump.

"For about the fourth time, he argued that the 'golden showers thing' wasn't true," Comey wrote, saying Trump asked, "'Can you imagine me, hookers?'"

In the book, Comey also addresses one of the most controversial aspects of his tenure atop the FBI -- the decision, just days before the election, to inform Congress that the agency had discovered emails potentially related to the investigation into Hillary Clinton's email practices as secretary of state.

Comey said he has wondered if his assumption that Clinton would inevitably win influenced his choices.

"It is entirely possible that, because I was making decisions in an environment where Hillary Clinton was sure to be the next president, my concern about making her an illegitimate president by concealing the restarted investigation bore greater weight than it would have if the election appeared closer or if Donald Trump were ahead in all polls," Comey wrote. "But I don't know."

Clinton, for her part, has pointed to Comey's controversial decisions as a cause of her defeat.