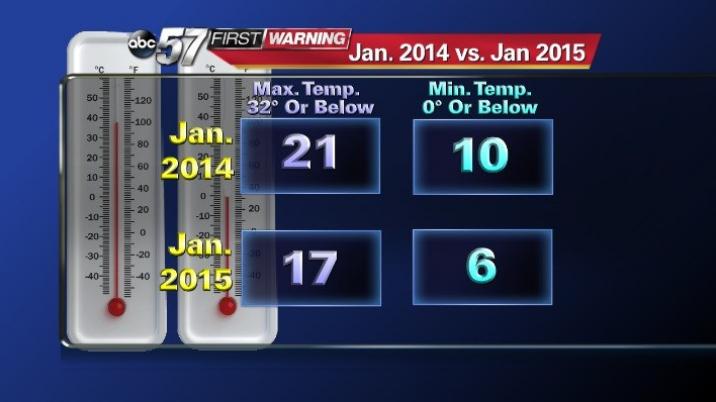 SOUTH BEND, IN - Ringing in the new year, it's that time that we can turn a new page and start fresh.  However, everyone was wondering if this January would be a recurring frigid, snowy nightmare like January 2014.  Now that January 2015 has come and went, it's time to take a look back and compare.

Now that temperature has been sorted out, let's compare monthly snowfall totals. According to Fig. 2, the first half of January this year was off to a snowy start, topping out at 20.4", nearly two inches more than 2014.  Then, the second half of January 2014 came back with vengeance, dumping 28.3", bumping up the monthly total to 46.6".  A lull in the snowfall for the second half of January 2015 stripped it of it's snowy lead and led to a monthly total of 22.1".  Therefore, January 2015 goes down in the record books as more bearable than the frigid nightmare of 2014.
Share this article: