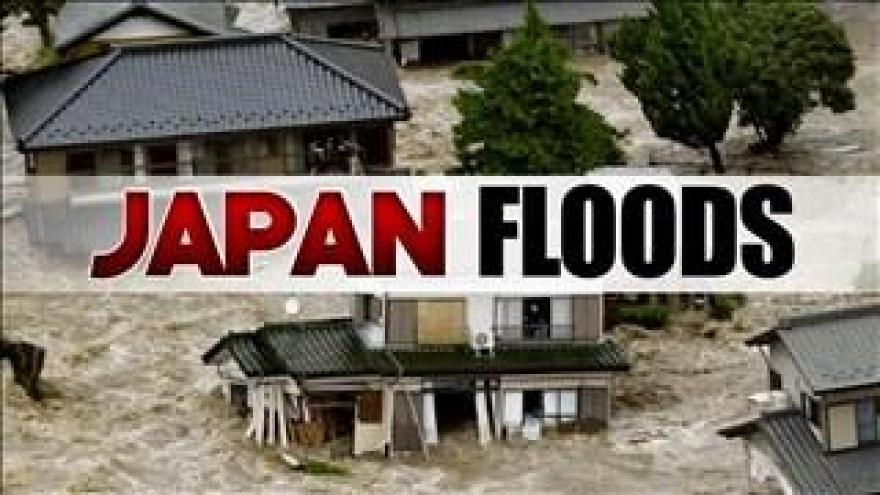 At least 27 people have been injured across 10 prefectures since floods inundated parts of eastern Japan after a tropical storm, the Fire and Disaster Management Agency said.

Rescue operations continued in Joso city, one of the worst-hit areas, although floodwaters are receding, it added.

About 183,500 people had been ordered to leave their homes since the tropical storm hit. A total of 2.8 million have been advised to evacuate, the agency said.

Rescue teams in Osaki city battled to save residents Friday after a section of a levee containing the Shibui River broke.

In Miyagi Prefecture, one woman was found dead in her floating car, and in Tochigi Prefecture, to the north of the capital Tokyo, two deaths were reported. One of the deaths was in a landslide and a second victim had drowned.

In some areas during the past two days, residents were forced to their rooftops, desperately awaiting rescue by military helicopters.

The raging brown floodwaters spawned from Tropical Storm Etau, which has dumped more than 60 centimeters (2 feet) of rain over some areas since Monday.

Add several weeks of near-daily downpours as the rainy season lingers, and swaths of eastern Japan are now deluged.

"Tochigi Prefecture is facing a grave danger and is in an emergency situation," Japan Meteorological Agency Spokesman Takuya Deshimaru said.

"It is experiencing unprecedented downpour."

Joso: At the heart of the floods

In Joso, Japanese forces helicopters landed on the roof of a shopping center Friday, where dozens of people had been stranded overnight.

In a rare break from the rain, the sun has allowed flood waters to visibly recede, but many roads remain impassable. Drivers who attempted to brave the inundated streets were forced to abandon their broken down vehicles.

Most of those reported missing were in the city.

Rescuers in an amphibious vehicle took Hitoshi Hirose and his wife, Richiko, to the area near their flooded home in Joso on Saturday. Their house was destroyed but their pet dog survived -- hungry but unharmed.

"Our home is a total loss but at least everyone in our family is safe," Hirose said.

His father, Ai Hirose, 85, described it as the worst flooding he's seen in his lifetime along the Kokaigawa River.

In parts of Tochigi, more than 50 centimeters (1.6 feet) of rain fell in 24 hours, Japanese broadcaster NHK reported. That's about double the amount that typically falls in the region for all of September, it said.

Fukushima Prefecture, which was devastated by the 2011 tsunami, saw more than 30 centimeters (1 foot) of rain in 48 hours -- the heaviest downpour there in 50 years, NHK said.

TEPCO, the company that operates the failed reactors in Fukushima that at the time caused one of the biggest nuclear accidents in history, said it detected slightly tainted "rainwater flowing out into the ocean" from the site this week.

CNN's Yoko Wakatsuki reported from Japan and Katie Hunt wrote from Hong Kong. CNN's Will Ripley and Euan McKirdy contributed to this report.