Jeb Bush breaks his silence, calls for a contested convention 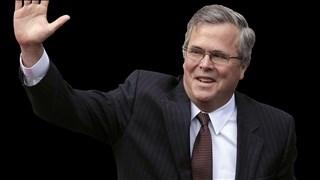 WASHINGTON (CNN) -- A reflective Jeb Bush said he had no regrets Thursday about his failed presidential bid, saying in his first interview since leaving the race that Donald Trump could still lose the nomination fight.

"There's a possibility that he won't get 50% on the first ballot," Bush told CNN's Jamie Gangel, giving his first television interview exclusively to CNN after dropping out of the presidential race in February. "And if he doesn't do that, there are a whole lot of people who don't believe he's the proper guy."

Bush, who has endorsed Texas Sen. Ted Cruz for president but been largely invisible as a surrogate, wouldn't say whether he would support Trump as the nominee in November, though he added there's no way he would vote for Hillary Clinton. When asked repeatedly how he would vote if Trump became the nominee, Bush responded, "I'm hopeful he won't be."

The former governor said only two people could win the nomination, seeming to not recognize the argument made by Ohio Gov. John Kasich that he could emerge as the nominee.

Bush said he observed Trump's foreign policy speech Wednesday with bewilderment, saying, "I don't think he is a serious person."

"I don't know which Donald Trump to believe," he said. "The one that read from a teleprompter a speech that was inside the lines, or the one that wants to build a wall and make Mexico pay for it."

Bush had harsh words for the press, who he labeled an "accomplice" of Trump and blamed for a "despicable," ratings-driven approach to news. And he did not rule out a future run of his own, even though he conceded that the 2016 race, which he entered as the front-runner, was his best chance.

"I've learned to never say never. But this was my chance. This was the chance and I ran into a storm," Bush said, adding that he's hoping to retain some of the policy minds he recruited for his campaign. "It just didn't resonate -- people were interested in other things this election."

Bush said that he could have done little to change the outcome in a wild presidential race.

"I've concluded that whatever mistakes I made -- and I certainly made them -- probably wouldn't have changed the outcome. Because I'm not going to change who I am," he said. "It gives me some comfort."

Bush also pushed back on the idea that the "establishment," of which he is firmly ensconced as the son and brother of former presidents, had as much power or was as monolithic as described, saying radio host "Rush Limbaugh has as much power as (Republican National Committee Chairman) Reince Priebus."