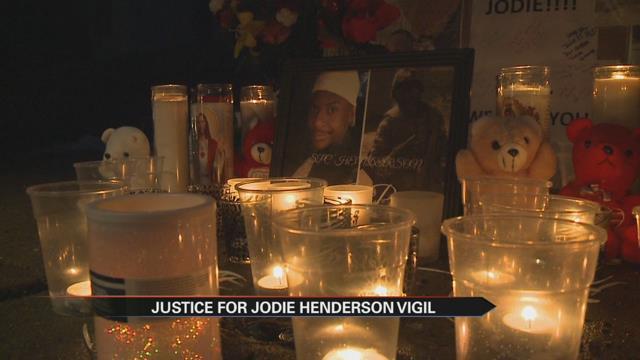 A grieving mother is calling for the people responsible for her son’s death to come forward.

And while police work to find leads in this case, the family is working to find closure.

“I just want justice for my brother because he deserves it,” said Deanna Forrest, Jodie’s sister.

Candles in Jodie’s honor replaced the police tape that once covered Sorin and Arthur Street.

“I’m standing here where my son was killed and his life was taken away from me for no reason,” said Patricia Forrest, Jodie’s mother.

But replacing the almost endless tears shed might not happen soon enough for this family.

“No mother wants to bury their own child,” said Patricia.

The Forrest Family made a plea during Thursday night’s vigil, for anyone who can bring justice for Jodie.

While he was beloved by his family for his adventurous spirit, he was loved by many more for his service to his country.

So it’s hard for this family to figure out why anyone would take away their hero.

But even as the pain grows in this grieving family’s hearts, there’s still room for forgiveness and hopefully closure.

“The lord sent his only son to die for our sins, he forgave us, I definitely forgive everybody, but I’ll never forget,” said Deanna.

Mother Patricia Forrest spoke with a neighbor that saw her son’s body in the street before he was found by police.

The family is working to get any new information to investigators that can finally bring justice for Jodie.