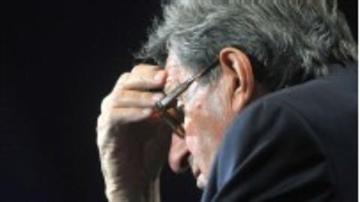 STATE COLLEGE, Pa. -- In light of the child sex-abuse scandal at Penn State, Joe Paterno's name has been removed from the new Big Ten championship trophy, the conference announced Monday.

The Big Ten said that the crisis at Penn State, which led to Paterno's firing as coach Wednesday night, prompted the decision to remove his name from the Stagg-Paterno Championship Trophy. The trophy will be awarded Dec. 3 at the inaugural Big Ten football championship game at Indianapolis.

The trophy will now be called the Stagg Championship Trophy.

"We believe that it would be inappropriate to keep Joe Paterno's name on the trophy at this time," Big Ten commissioner Jim Delany said in a statment. "The trophy and its namesake are intended to be celebratory and aspirational, not controversial. We believe that it's important to keep the focus on the players and the teams that will be competing in the inaugural championship game."

Amos Alonzo Stagg won 319 games in 57 years, most at the University of Chicago. Paterno's 409 wins are the most by a major college coach.

Penn State (8-2, 5-1 Big Ten ) and Michigan State (8-2, 5-1) lead their respective divisions and will advance to the title game in Indianapolis if they win the rest of their games.

The Big Ten pointed to the recent grand jury indictments against retired Penn State assistant coach Jerry Sandusky and two other officials, a U.S. Department of Education investigation into Penn State's response to the allegations of sexual abuse involving Sandusky, and Paterno's dismissal by the school's board of trustees as reasons to remove Paterno's name from the trophy.

Robert Stagg of Grand Rapids, Mich., a great grandson of Amos Alonzo Stagg, said last week his family was honored to have the Stagg name on the trophy whatever happened with Paterno's name.

Paterno was fired Wednesday after he initially said he planned to retire at the end of his 46th season, but the outcry following the arrest of Sandusky on 40 criminal counts of molestation proved too much for the board of trustees to ignore.

Defensive coordinator Tom Bradley was selected as interim coach, and No. 21 Penn State lost Saturday in its first game of the post-Paterno era. The Nittany Lions, who have a one-game lead on Wisconsin (No. 17 BCS, No. 15 AP) in the Leaders Division of the Big Ten, finish the season with road games against Ohio State and the Badgers.

Tickets to the championship game already have been printed and they include an image of the trophy and the name Stagg-Paterno. Big Ten spokesman Scott Chipman said many of the tickets have been shipped and the conference will not reprint the remaining tickets.