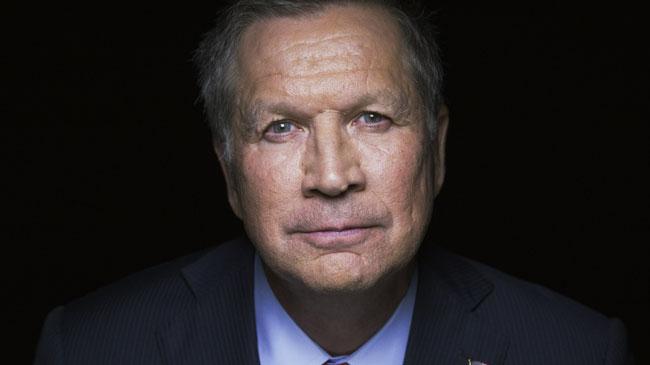 (CNN) -- John Kasich is dropping out of the Republican presidential race, he said Wednesday.

Kasich's decision to suspend his efforts came after he improbably became the last challenger to Donald Trump, who emerged as the presumptive GOP nominee Tuesday night when Ted Cruz dropped out.

"I have always said that the Lord has a purpose for me as he has for everyone," Kasich told reporters in Columbus, Ohio. "And as I suspend my campaign today, I have renewed faith, deeper faith, that the Lord will show me the way forward, and fulfill the purpose of my life."

Even before winning his home state of Ohio in March, Kasich was facing pressure to get out of the race, with no clear path to victory. His campaign never became more than a spoiler run, designed to keep Trump from getting the 1,237 delegates needed to win the nomination before a contested convention.

But he was not yet ready to quit. Kasich had fundraisers scheduled in the Washington area Wednesday, and was on a plane at the Columbus airport when he had a change of heart.

After having the plane taxi back from the runway, according to one source close to Kasich, he then called four of his closest friends, and said, "My heart is not in this." The source said that his friends then told Kasich that if his heart is not in it, he ought to do what he needs to do.

Kasich was always a somewhat offbeat Republican contender, who laughed at himself on the trail, occasionally took positions more in line with Democrats (like expanding Medicaid in Ohio) and touted his ability to work across the aisle. He sometimes even joked that he would have done better in the Democratic primaries than in the crowded Republican field.

The two-term governor attempted to distinguish himself from the the raucous GOP field by avoiding direct attacks and striking a more positive tone. (His affiliated super PAC, however, was not shy about criticizing opponents for being negative.)

The future has clearly been on the mind of the candidate: As of Tuesday night, there were clearly very high level discussions about what he should be doing.

One of his outside advisers said Tuesday night that he expected Kasich to pull out, but then reversed the story. A senior campaign official said that Kasich would be staying in the race despite Cruz's withdrawal and would challenge Trump to debates.

The official Tuesday night said that Kasich was staying in because there was "too much to fight for: the soul of the GOP and the future of America."

Publicly, Kasich's campaign also insisted he would stick around.

"Sen. Ted Cruz just dropped out of the presidential race and it's up to us to stop Trump and unify our party in time to defeat Hillary Clinton," Kasich campaign manager Ben Hansen said in a fundraising email to supporters Tuesday night.

And Wednesday morning, a senior outside adviser held a call with donors, with the game plan to continue to the convention. Another adviser, who was planning to attend a national security meeting for Kasich, was then told that the meeting was off.

In their effort to stop Trump from crossing the 1,237 delegate threshhold, Kasich and Cruz made an unusual deal the week before Indiana, agreeing for the Ohio governor to leave the state to Cruz and for Cruz to vacate Oregon and New Mexico in an effort to allow both to take on Trump one-on-one in states presumably favorable to their efforts.

The two also met this past Saturday at the California GOP convention hotel outside of San Francisco, according to a Kasich source familiar with the meeting. The meeting came at Cruz's request, because Cruz wanted to have friendlier relations between the two last non-Trump candidates in the race.

The two spoke mostly about the "contours of the race," the source said, and agreeing that if Cruz won Indiana they could work together in California.

Kasich could potentially still end up on the Republican ticket -- he has been floated as a possible pick for vice president, based in part on his popularity in Ohio, a crucial swing state.

Kasich, who served 18 years in the House before a lucrative stint at Lehman Brothers, was long viewed as a 2016 dark horse, running in the crowded "establishment lane" with candidates such as Jeb Bush and Marco Rubio.

He pinned his hopes early on New Hampshire and dedicated the vast majority of his time and resources there. Kasich did well there, finishing second after attending 190 events in the Granite State, according to the NECN candidate tracker.

Throughout the race Kasich played up his fiscal bona fides as the last House Budget Committee chairman to craft a balanced federal budget, during the Clinton administration.

He also talked extensively about his working-class upbringing in McKees Rocks, Pennsylvania, just outside Pittsburgh. He often told the story of when, as a freshman at Ohio State University in 1970, he wrote a letter seeking a private audience with President Richard Nixon.

And his punchline to his Nixon visit? The White House granted him five minutes with Nixon, but he refused to settle for that and took 20 minutes.

On the trail, Kasich occasionally stumbled with voters, delivering blunt answers that were not always popular. In September, he told supporters at a California golf club that "you leave a little tip" for Hispanic maids, drawing criticism from some Latino groups.

And a few weeks after that comment, he told one voter that she would have to "get over" proposed cuts to Social Security.

He earned a spot on the main stage at the first Republican debate last August, riding a bump from his late-July announcement and staying off the undercard stage for each debate afterward. But Ohio ended up being his only moment of triumph.