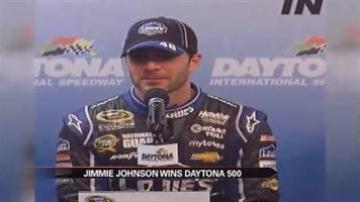 Patrick became the first woman to lead a lap in NASCAR's premiere series. Patrick ended the race in eighth place.

Speedway crews worked through the night to repair the fence that was damaged during the Nationwide race on Saturday.

A 12 car crash sent debris flying through the air and into the stands injuring 28 people.