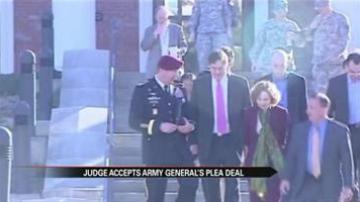 A judge has accepted a top military commanders' plea deal in a highly-publicized sexual assault case.

Army Brigadier General Jeffery Sinclair pleaded guilty to adultery, admitting that he had a three-year affair with an Army captain while he was overseas.

The female captain claimed it was not consensual and that Sinclair assaulted her while she was under his command.