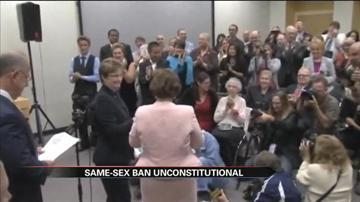 SALT LAKE CITY — A judge in Utah has struck down a ban on same-sex marriage.

After the ruling, hundreds of couples showed up to get married almost immediately. And Salt Lake City's mayor even officiated some of the marriages himself.

The judge said the ban on same sex marriage was demeaning for no reason.

"We did not ask Judge Shelby to bring same-sex marriage to Utah," said Mark Lawrence of Restore Our Humanity. " We asked him to enforce the constitution of the United States, and that's exactly what he did."

The National Organization for Marriage called the ruling a travesty of justice.

The state has filed an appeal of the ruling.