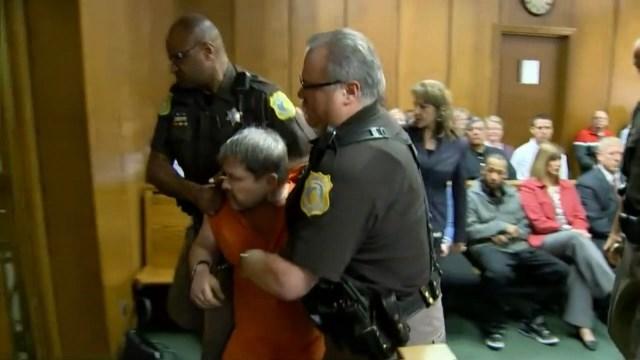 (CNN) -- Kalamazoo shooting suspect Jason Dalton had to be restrained and dragged out of a Michigan courtroom Friday after an outburst during his preliminary hearing on murder charges.

Tiana Carruthers was on the witness stand describing the moments before Dalton allegedly shot her as she escorted her daughter and four other children to a park in her apartment complex.

Police say Dalton killed six people and injured two others in between picking up fares as an Uber driver in the southwestern Michigan city on February 20.

Carruthers told the court that she and the others were walking through the parking lot when a silver SUV nearly struck them. The man inside the vehicle asked her if she was "Macy" or "Maisie."

When she started to describe the moment the man approached her, Dalton interrupted her.

It's unclear what Dalton was referring to. Carruthers began to cry and the judge asked Dalton to speak quietly to his attorney for the rest of the proceedings.

Moments later, Dalton attempted to stand. Court officers quickly restrained him and then dragged him out of the courtroom. On the stand, Carruthers screamed and was surrounded by her legal team and supporters. They escorted her out of courtroom.

He allegedly drove from one location to the next, shooting people seemingly at random at three different places. Dalton also apparently picked up multiple passengers over the day as an Uber driver.

He told investigators the Uber app made him "like a puppet" and that it would "take over your whole body."

In April, a judge ruled Dalton fit to stand trial.