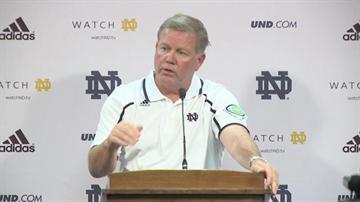 NOTRE DAME, Ind. – Head Coach Brian Kelly said after losing to Oklahoma on Saturday that this is a team loss.

The coach added the match boiled down to turnovers.

“It's running the football effectively and then we don't want to put Tommy in a position where he's got to carry the whole load. So we thought that the second half we were able to get into a position where we ran the football, play-action pass, some quick throws. That's how we want to play,” said Kelly.

There were bright spots in the second half when George Atkinson III ran in for an 80 yard touchdown to bring the Irish within seven.

“That's the way he should run each and every week. I think he's capable of doing that, and we just need that from him consistently,” said Kelly.

Kelly said it comes down to giving the team more options.

“You know, we're just trying to diversify the offense a little bit, trying to add some more looks. He's got some work to do. We've got to continue to work with him, but I think it gives us some things that the defense has to defend as well with him in there,” said Kelly.

Kelly said that means it’s back to work for his team this week.