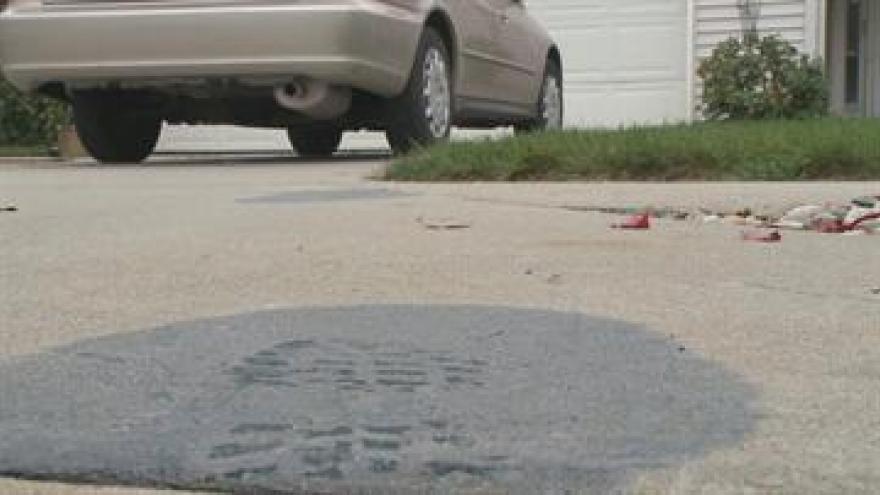 GOSHEN, Ind. – The crime scene at the Miller’s house on Wildwood Court has been cleared. The yellow police tape was taken down and the detectives and crime technicians have cleared out.

On Thursday afternoon, from the top of the street the Miller home almost looked like every other house on the small, quiet cul-de-sac.

But as you get closer it’s hard to not notice the patches of blue that travel from the curb of the driveway all the way up to the front door.

The chalky blue blotches are from luminol, a compound that is used to trace blood highlighted bloody footprints left outside the Miller’s home.

“It’s a little upsetting to be so close to the crime scene,” John Ingold said as he stood in the Miller’s driveway.

The evidence appeared to at the bottom of the driveway, just before the curb. The prints started with a smudged shoe sole just inches from where James Miller’s body was found.

Ingold stared down at the print, and then glanced down to the pavement in front of the mailbox, still stained with blood, “Where a good friend, a neighbor was attacked.”

With his foot next to a blue blotch, Ingold said he wears a 10 and a half shoe, the print was a little bit bigger than his shoe.

From there, the shoe prints led up the Miller’s driveway and to the front door. Ingold said, “The police and the people want to know what the motivation is for the person who committed the crime.”

But Ingold said the who is much more important than the why in this investigation right now, “Especially when it’s close to one’s home, we’re going to feel uneasy until the intruder is caught and brought to justice.”

The Goshen Police Department did not release any new information on the investigation, but did confirm on Thursday afternoon, no arrests have been made and no one is in custody.

Ingold  said until an arrest is made, everyone is on edge, “I just hope that we could have some closure for the family’s sake and for the community’s sake.”

The Goshen Police Department is scheduled to hold a news conference Friday afternoon at 3 p.m. to discuss the attack that left James Miller dead and his wife seriously injured.

This is the first time the department will take question about the investigation since it began on Sunday.