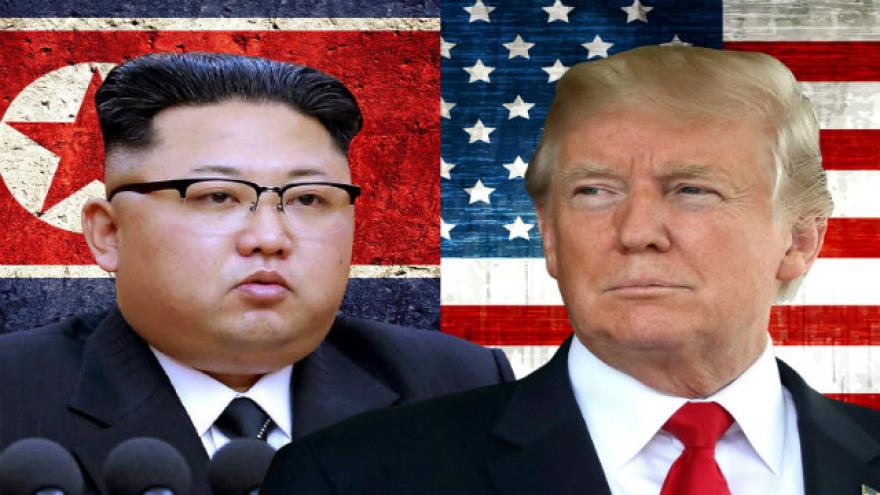 By Will Ripley, Ralph Ellis and Ben Westcott

Moon and Kim met at the same location in Panmunjom last Friday, a historically significant event that was televised worldwide and led to an agreement to denuclearize the Korean Peninsula and formally end the Korean War.

There is a "strong possibility" the summit will be held at the site, with some events possibly scheduled on the northern side of the military demarcation line separating the two countries, according to an official with deep knowledge of North Korea's thinking on the matter.

The venue makes the most sense logistically for Kim, the source said, because media facilities and equipment are already in place, which could allow the summit to take place "in late May."

Traveling to the northern side of the demilitarized zone (DMZ) would also provide a historic opportunity for Trump, the source said, adding that Moon may be involved in the summit in some capacity.

A spokesperson for the South Korean president appeared to endorse the venue choice when asked about the proposal, Tuesday.

"(We) think Panmunjom is quite meaningful as a place to erode the divide and establish a new milestone for peace," the spokesperson told reporters. "Wouldn't Panmunjom be the most symbolic place?"

Made for TV moment

The idea of meeting at the DMZ wasn't a complete surprise to Trump's aides, since the president has been talking about it all weekend and raised it in his Sunday phone call with Moon, a senior US official and a person familiar with the conversations told CNN.

Trump loved the images from the inter-Korean summit and the fact the entire meeting was televised, those sources said.

Speaking to reporters Monday, Trump said he was enthusiastic about the idea of holding the summit in the DMZ. "There's something I like about it, because you're there, if things work out, there's a great celebration to be had on the site, not in a third party country," he said.

Millions watched Moon's meeting with Kim last Friday, the first meeting between two leaders of North and South Korea in a decade.

Cameras followed the leaders' movements throughout the day, from Moon's departure from Seoul to the moment Kim crossed the demarcation line into the South -- and encouraged Moon to cross to the North.

The US President wants to be involved in similar scenes when he becomes the first sitting US President to meet a North Korean leader, the source said. He's keen to take part in a cross-border handshake, but also wants photos to document the moment if he decides to stand up and walk out of talks, added the source.

However, concerns remain inside the administration that Trump may be too eager for a deal. Those same skeptics worry holding the meeting at the DMZ will appear conciliatory toward Kim.

As a result, US officials are still arguing for Singapore as a possible location for the talks, telling Trump it presents a more neutral option, the source told CNN.

The wealthy and glamorous city-state sits on the end of the Malay Peninsula and has often been seen as a gateway between Asia and the West.

A close ally to the United States during the Cold War and currently host to a US military presence, Singapore also has a diplomatic relationship with North Korea. It is one of only 47 countries to feature a North Korean embassy.

Additionally, Singapore has previously held other historic events -- in 2015, Chinese President Xi Jinping met with then-Taiwanese President Ma Ying-jeou in Singapore, the first and only time the leaders of the two Chinas have met since they split in 1949.

But one senior official conceded the symbolism wouldn't be there, and noted there are still logistical considerations to worry about with Singapore.

Singapore also raises problems for Kim. Similar to his father before him, the North Korean leader is reluctant to travel long distances by plane, partly due to security issues -- a plane is vulnerable to attack -- but also due to practical considerations.

"(Kim's) fleet of aircraft are very old and (we're) just honestly not sure if he can physically get to where he needs to go if its further than a certain number of miles away," Jenna Gibson, director of communications at the Korea Economic Institute, told CNN.

Faced with a similar dilemma, Kim Jong Il, Kim's father and previous ruler of North Korea, opted to travel in a custom built armored train, rather than moving around the world by air.

Another option previously suggested by both sides was Ulaanbaatar, the sparsely-populated capital of Mongolia to the northwest of North Korea.

It might seem like an unusual choice of location but North Korean experts maintain it makes sense to both sides for a number of reasons.

Firstly, the Mongolian government has diplomatic ties with both Pyongyang and Washington, leaving it as a neutral ground for the two leaders.

Additionally from North Korea's perspective, Ulaanbaatar is much closer to North Korea and Kim could likely travel to the summit in comfort on his father's armored train.

"Mongolia is very eager to host this summit, they have come out and said they will host it ... They want to be the Switzerland of Asia, they want to be seen as a partner that can have good ties with everybody," Gibson said.

But it also is not a perfect choice either, as it would require Trump to travel a lot further than Kim, which may be seen as a concession to North Korea from the outset.

Speaking to CNN, Jean Lee, a North Korea expert at the Wilson Center, said a number of other potential options, such as Beijing, Pynongyang and Washington, were eliminated early on due to their political implications or logistical difficulties.

"Ultimately, they need a country where both leaders have the security they need, to have a country where they can meet in common ground ... it's a small number of countries to be honest" said Lee.