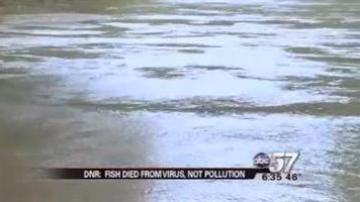 MISHAWAKA, Ind. -- Initially, the state thought pollution was killing off fish in the St. Joseph River this summer.

Now, the Indiana DNR says it was actually a virus called Koi Herpes. The virus is specific to carp. Most of the dead fish were found between Elkhart and Mishawaka.

Officials say it isn't dangerous to eat fish that are infected with the virus.

Rising water temperatures and other bacteria could have played a role in the deaths as well.