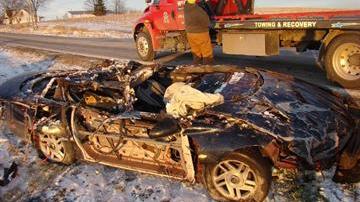 AKRON, Ind. -- A teenager from Mentone was injured on Tuesday in a single car crash in Fulton County.

Troopers said 17-year-old Dylan R. Stimeling was driving a 1994 Chevrolet Camero southbound on State Road 19. They said the teen was driving too fast in the northbound lane. When he tried to return to the southbound lane, he lost control, traveled off the west side of State Road 19, hit a pile of cement blocks, and flipped the car.

Firefighters had to use the jaws of life to cut him out of his car.

The teen was then flown from the crash scene by Samaritan Helicopter to Parkview Hospital in Fort Wayne, Ind. He suffered head trauma and is listed in critical, but stable, condition.

Police said Stimeling was wearing a seatbelt at the time of the crash. They think it helped to reduce the severity of his injuries.

Police said excessive speed was a contributing factor in the crash.

(Source: This information is from a press release, courtesy of the Indiana State Police, Peru District)