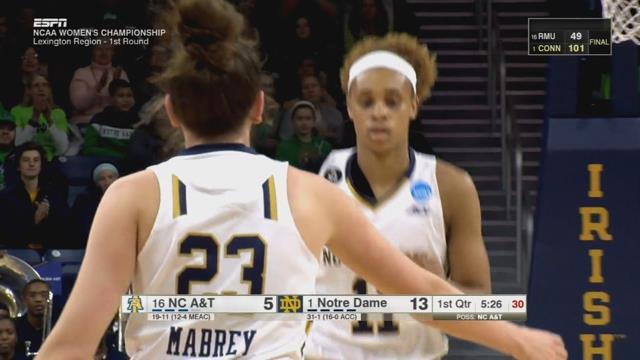 It was a big win for the Notre Dame women's basketball team in the opening round of the NCAA Tournament.

On Monday, they will continue to round two of the tournament.

Coach McGraw commended the team on the way they worked so well together.

“It just is amazing how unselfish we were. I mean there were times when somebody had a wide open shot and they gave it to somebody for just a little better shot. It’s really fun to watch them play that way when they share the ball. Everybody gets excited they all love to get assists just as much as points. Nobody cares who the leading scorer is,” said Coach Muffet.

Now, the team is looking ahead to Monday’s match up against Indiana/

"We’re excited to play in the second round game. We are just going to go to practice tomorrow, see what the coaches have planned for us and we’re excited,” said Madison Cable.

While the players are focused on that next step in the tournament, fans already have their sights set on the final four-- hopefully meeting up with a familiar foe.

“I think we’ll definitely make it to the final four and of course it would be wonderful to beat Connecticut,” said fan Noelle Barton.