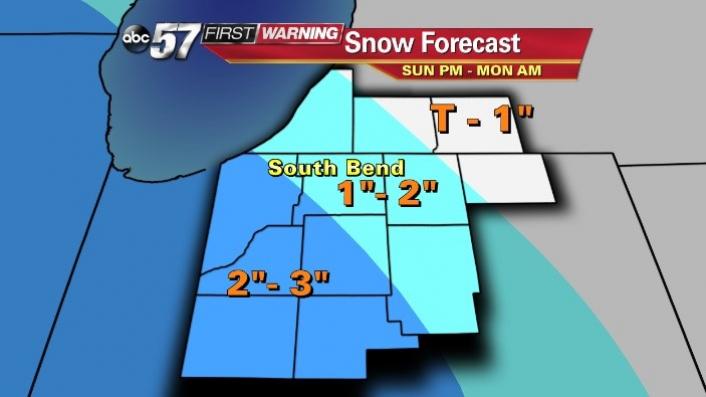 After last week's almost never-ending lake effect snow that extended into the first half of the weekend, we finally saw a break by last night as skies slightly cleared allowing the temperatures to drop.  Valentine's Day morning started off subzero resulting in the 3rd coldest Feb. 14th low for South Bend.  However, after a lull in the snow, the winds shifted and a new system was bringing snow in from the west, resulting in system snow.  This started off in our southwestern most counties by 1PM EST, spreading north and east throughout the rest of the afternoon and evening hours.  By 8:30PM EST, the snow stick outside of the ABC-57 studios in South Bend measured 1.7" of snow with a light snow still falling at the time of the observation. Forecast Track shows the system breaking apart over our area after midnight.  Here's a look at Forecast Track's progression through Presidents' Day morning: We're still on track to getting between 1" - 3" of snow through the early morning hours of Presidents' Day.  The most snow accumulation will be in our south western counties including Starke, Pulaski, and Fulton Counties.  Expect to be brushing off the new snow off your car before your Monday morning commute.

Plus, this system snow has a sparkly glow to it.  Be sure to post/share your photos to the ABC57 First Warning Neighborhood Facebook Page or tweet us your photos @abc57news.  Also, learn more information about the science behind these types of snowflakes here.

An end of the week warm-up brings unseasonably warm temperatures back to Michiana after a bitter cold and snowy weekend.  Check out the forecast here.