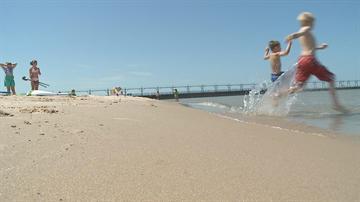 SAINT JOSEPH, Mich. - What if you could safely dip your glass right into Lake Michigan and drink the water. It’s not far from reality.

“You don’t want your kids jumping into water that’s got stuff in it,” said Robin Siomos, grandmother of three.

Little did Siomos know when Wednesday, that her grandchildren on Tiscornia Beach in Saint Joseph were about as safe as they’ve ever been in the water.

“It’s rare,” said Ken Priest with Berrien County Environmental Health. “It’s frankly close to drinking water quality. When we have less than 10 counts its essentially saying we’re finding no evidence of E. coli in the water.”

E. coli levels of less than 10 parts is the lowest possible score. Drinking water is zero.

“When our weather gets dryer and dryer that’s when water quality gets better and better,” said Priest. A benefit of drought is rain doesn’t wash E. coli into streams, and rivers and Lake Michigan beaches tend to test clean.

“I wouldn’t plan on drinking it,” said Cindy Beaudway on Tiscornia Beach.

Priest said there are other reasons not to actually drink Lake Michigan water even if tests are clean for E. coli.

Priest says it’s one of the benefits to drought. “I don’t think you should actually drink it because there could be giardia or something else but essentially it’s very good.”

Siomos feels safer with clean water but not enough to indulge. “I wouldn’t recommend you drink it.”