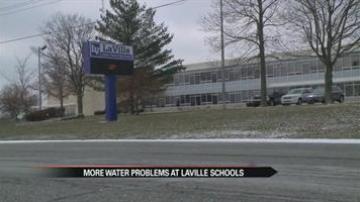 So far this year, students have missed a week of school because of water issues. The school has already replaced a broken water pump, but over the weekend the system failed again.

To make repairs, school was canceled Monday and Tuesday.

Parents are getting worried because their students keep missing class.

Anthony Hatter spent part of Monday sweeping up. It's not how the seventh grader expected to spend his day.

"It's a nice little bit of extra hands helping out, but at the same time, he really needs to be in school," said Summer Bennett.

Bennett says it is getting frustrating. Hatter has missed seven days of school already because of the water problems.

The school is having problems with the water pressure.

Bennett has been told a fix is on the way, but after so many cancelations, she's skeptical.

"When we got the email yesterday, it's kind of like is this a snowballing effect? You know, what's going on?" said Bennett.

Mawhorter says the school's well dates to the early 1960s so the problem is hard to diagnose.

"There is no guarantee when you're working with stuff like this," said Mawhorter.

Tuesday, workers are replacing a few electric circuits near the pump. They hope that will finally get the water flowing permanently.

"A lot of the building is fairly old, and so we've had some other electrical things we've had to fix," said Mawhorter.

The school district has already scheduled a few make-up days in the next coming months.