Landmines placed in the path of Rohingya refugees on Myanmar border 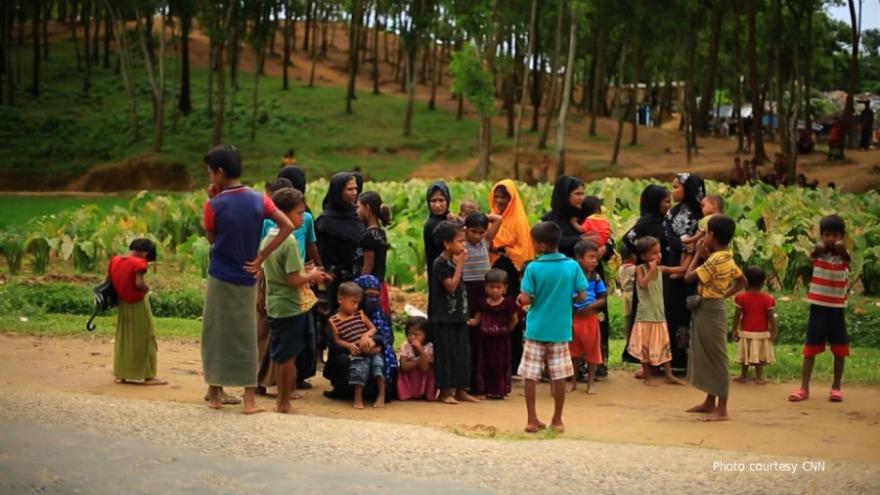 (CNN) -- Bangladesh summoned the Myanmar ambassador Wednesday to urge an end to the violence that has engulfed the region and to raise concerns about reports of landmines being laid along the border between the two countries.

At least 164,000 ethnic Rohingya Muslims have fled to Bangladesh from Myanmar since August 25, according to the Inter Sector Coordination Group (ISCG) of humanitarian agencies in Bangladesh. The United Nations expects that number to jump to 300,000 by the end of the year.

On Wednesday, a senior Bangladeshi border guard, who did not want to be named, told CNN that one of his guards reported an incident from Monday in which two Rohingyas fleeing Myanmar were injured by separate landmines. They were carried across to the Bangladesh side of the border and are now in a hospital receiving treatment.

"That happened on the Myanmar side in the north of the border area," the senior border guard said.

"Some mines were placed there, then someone stepped into it, and it exploded, and a few Rohingyas got injured," he said, adding that a woman lost her leg and a boy also suffered injuries.

"It's possible the Myanmar military has planted the mines. There is no one else who could do it," he said.

The senior guard said some of the Rohingyas had learned how to defuse the mines.

A humanitarian official in the city of Cox's Bazar, Bangladesh, confirmed hearing reports of landmine injuries.

More than 400 killed in recent violence

At least 414 people have now been killed in violence in Rakhine State in recent weeks, according to a statement published by Myanmar's government.

Myanmar state media has blamed local "terrorists" for placing mines in Rakhine State -- where Rohingyas are concentrated -- although not specifically on the border.

Photos of a Rohingya man holding mines on the Myanmar side of the border were sent to CNN by activists and examined by a mine expert, who confirmed that the two objects are PMN1 antipersonnel devices.

"I can state with 100% certainty that the two objects being held up in the photograph are PMN1 antipersonnel landmines," said Chris Clark, global director of operations at UK-based Dynasafe Area Clearance Group, who said the Russian-made devices are one of the most common types of landmines around the world.

"The fact that it is in Myanmar is not at all unusual. It would be extremely usual for them to have access to that type of mine. That is most certainly not a handmade mine."

Clark also said that it is possible that some of the Rohingya could have learned how defuse mines, though he stressed that those seen in the photograph were still live.

The government of Myanmar, which is also known as Burma, blames "terrorists" for starting the violence that has shaken the region. Rohingya militants killed 12 security officers in attacks on border posts almost two weeks ago, according to state media, intensifying the latest crackdown.

The Rohingya, who are denied citizenship by Myanmar, are considered some of the most persecuted people in the world. The predominantly Buddhist country says they are Bangladeshi but Bangladesh says they're Burmese.

It is the second time in less than a year that a military crackdown has led to a mass exodus.

Bangladesh summoned the ambassador of Myanmar to lodge a "strong protest" at an "unprecedented level of influx of Myanmar nationals to Bangladesh," according to a statement from the country's foreign ministry.

"This new influx is (an) unbearable additional burden on Bangladesh which has been hosting around 400,000 Myanmar nationals who had to leave Myanmar in several rounds in the past owing to communal violence and repeated military operations," the statement said.

During the meeting, Bangladesh demanded "immediate measures" from Myanmar to de-escalate the ongoing violence in northern Rakhine State and "regretted that appropriate measures for protection of civilian population have not been ensured during the military operation."

It also urged Myanmar to stop the influx by addressing the "real cause of such unprecedented exodus," along with ensuring that Myanmar takes back all nationals who have arrived in Bangladesh, the statement added.

The news came as Myanmar's leader Aung San Suu Kyi made her first public comments on the plight of her country's Rohingya minority since the latest violence began week.

'There is genocide going on'

Following conversations with both Turkish President Recep Tayyip Erdogan and Indian Prime Minister Narendra Modi, Suu Kyi issued statements that made it clear she was determined to deal with the "terrorist problem" in Rakhine State.

"We would like to thank India for its strong stance with regard to the terrorist threat that came to our country a couple of weeks ago," said Suu Kyi, after her meeting with Modi on Wednesday.

"We believe that together we can work to make sure that terrorism is not allowed to take root on our soil or on the soil in any neighboring countries."

Suu Kyi has been criticized in recent days for her continuing failure to speak in support of the minority Rohingya, a striking departure from her previous image as a champion of human rights.

On Tuesday, following a phone conversation with Erdogan, Suu Kyi's office released a readout of the call in which she claimed a "huge iceberg of misinformation" on the Rohingya was aiding "terrorists."

She said her government was already working to ensure the Rohingya had their rights protected.

"We know very well, more than most, what it means to be deprived of human rights and democratic protection," Suu Kyi said.