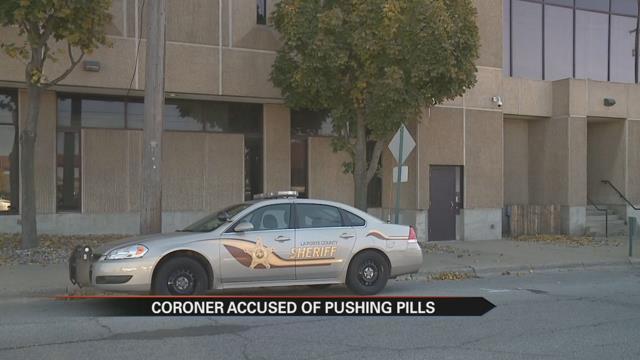 A woman who sees firsthand the number of deaths caused by drug over doses is being charged with selling drugs. Detectives with the LaPorte County Metro Operations Unit say at one drug deal she sold as many as 70 pills.

Dawn Maxson is the LaPorte County Deputy Coroner. The sheriff says she is believed to be the only person from the Coroner’s Office involved in allegedly selling pills.

According to detectives the narcotics were her personal prescriptions.

“This has been a 12 week ongoing investigation,” says Sheriff John Boyd with LaPorte County Sheriff’s Department.

Over those 12 weeks confidential informants met with Maxson at Kmart, CVS, and LaPorte Commons Apartments where Maxson lives, according to the sheriff's department.

According to the Drug Free Partnership of LaPorte, 40-percent of people addicted to pain killers become addicted to heroin.

Boyd added that they type of behavior that Maxson is being accused of is aiding the problem his county faces.

On the final drug deal that led to Maxson’s arrest, 70 pills over of hydromorphone were sold, according to deputies. That’s over 6,000 milligrams.

According to the Mayo Clinic, up to four milligrams of hydromorphone are recommend every six hours.

The sheriff’s department says this is an ongoing investigation.

Maxson is being held at the LaPorte County Jail. She is scheduled for court on Wednesday at 8:30 a.m.