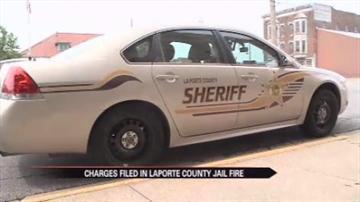 LAPORTE COUNTY, Ind. — An inmate has been charged with arson for a fourth of July fire at the LaPorte County jail.

Police say 35-year-old Marzono Shelly was in the jail awaiting a trial on murder and robbery charges when he started a fire in his cell.

Sheriff's deputies safely evacuated all of the inmates until the fire was under control.