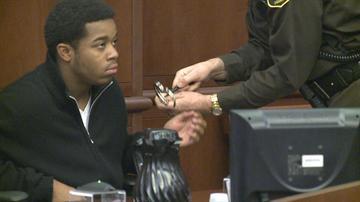 NILES, Mich. – A quick and surprising end in court for Martell Miller in Niles on Wednesday.  Miller and his attorney stopped jury selection to enter a guilty plea as part of a deal with the prosecution.  He admitted to his role in the incident on March 18th where he and Trey Nichols, Leon Murphy, Parnell Martin and Martise Washington all plotted to force a girl into sex by threatening to post a sex tape on Facebook.  Murphy, Nichols and Martin had all previously accepted plea deals and Washington was found guilty on seven charges in November and sentenced to at least 20-years in prison on Monday.

At a previous court appearance in November, Miller had demanded a speedy trial and vowed he was innocent.

“He wanted to have his day in court like Mr. Washington did, I was a little surprised that it ended up resolving in a plea this way,” explained prosecuting attorney Steve Pierangeli.

Tuesday and most of Wednesday morning were spent selecting a jury for Miller’s trial, a process that was slowed while the attorneys on both sides questioned potential jurors about what they’d heard about the case in the news.  Pierangeli explained that Miller’s attorney, Shannon Sible, approached him this morning asking for a deal.

“Over the past few weeks we’ve spoken extensively with the victims in this case,” Pierangeli described.  “In talking with them about the case and the possibility of a plea they were very much in favor of a plea.”

Miller was originally facing seven charges including various counts of criminal sexual conduct and extortion.  As part of his deal Miller pleaded guilty to attempted assault and battery to do great harm less than murder in connection with the so-called “sextortion” incident on March 18th.  He also plead guilty to assault in connection to an incident involving another victim that took place at Niles High School on February 11th.  Originally facing a possible life sentence, he know faces a maximum of five years in jail.

"I'm not satisfied with all aspects of the plea, but there's a lot of things I have to weigh…not only the strength of the case but the victims and what they have to go through for this,” Pierangeli explained.  "After speaking with the victims, their wishes on the case, what they wanted to see happen with the case, it got to the point where this process was becoming as traumatic to them as the sex assault itself."

Though disappointed with the plea, Pierangeli explained that his first concern was with the victims.

"I'm happy that the victims aren't going to have to go through this anymore,” he said.  “They're done, they can put this behind them now as best they can and start to work on healing and moving forward with this."

As part of the sentencing guidelines for his charges Pierangeli explained that Miller will likely receive a one-year sentence with credit for time already served.  Miller and his attorney argued for a bond to allow him out of custody, but Judge Scott Schofield rejected it and Miller was once again taken to the Berrien County Jail.  Miller will be sentenced on January 30th.