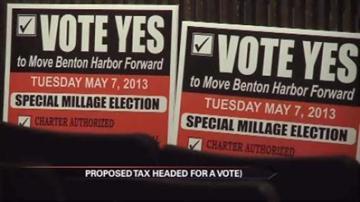 BENTON HARBOR, Mich. -- Benton Harbor leaders gave one last shot Monday at convincing the community to vote yes on a special tax that they say will save the city.

It’s the same millage that was rejected last year. It pays for police, fire and other city services.

With the special election just one week away, city leaders cranked up the heat on their “Say yes to move Benton Harbor forward” campaign.

But there was not much of an audience, and those who were there were in full support of the new millage.

"This is such an important issue everybody in this community has to take a stake in it and I am begging the city please vote yes," said former Benton Harbor Mayor Charles Yarbrough.

City leaders say if the proposal passes on May 7th, it will replace the current tax. Instead of the average homeowner paying $75 a year, they would pay closer to $30 a year.

They also say voting yes on this tax will create the finanacial stability that Benton Harbor needs.

Under the current special assessment the budget is reworked every six months, but this plan would lock the budget in place for ten years, bringing in over a million dollars a year.

"If you don’t know from six months to six months it makes it very difficult, with this, you know what you are going to have far in advance," said MayorJames Hightower.

Local churches will be offereing free rides to and from the polls.