Law enforcement steps it up at Notre Dame home opener 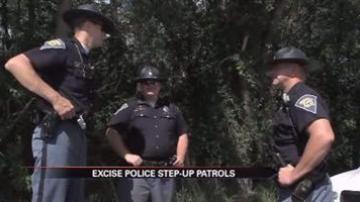 NOTRE DAME, Ind. -- People were out and about celebrating Notre Dames home opener, and because they were out celebrating, Indiana State police made sure there was extra police on the roads. Officers say they wanted to make sure everyone got home safe and could make it to the next home game.

"There needs to be cops around so people are safe and that people are not doing stupid stuff." said Chelsea Holland, a tailgater.

That is exactly what Indiana State Police are doing. They said there were 30 extra officers patrolling the streets, zoning in on drunk drivers.

"If you've been drinking definitely have a sober driver even if you're buzzed that's impairment and you're more likely to have those small crashes" said Sergeant Chad Larsh.

And how likely are you to get caught after getting tipsy behind the wheel?

Larsh says state police monitored the west and north side of campus, and South Bend police checked traffic coming and leaving the stadium.

"I expect we'll have minimal traffic problems.People are getting here early, likewise if we have a win at Notre Dame, the traffic will be slow to leave so it's good for everybody." said Larsh.

Larsh says he and his troopers will continue their patrols throughout the night, and will make sure to keep the roads as safe as possible.

State police say they're actually expected more people to be out celebrating the first home game. They will continue to have extra law enforcement when the Irish play at their own stadium.