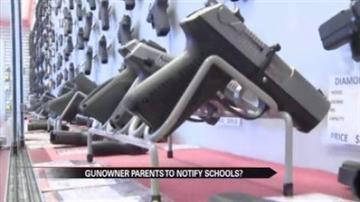 The shooting in Newton Connecticut prompted changes to the country's gun laws but now some school districts are taking it a step further.

One Missouri lawmaker wants to make it mandatory for all parents who own a gun to notify their child's school.

The bill's sponsor believes it will encourage parents to store their guns properly but some parents worry it is another gun law that avoids the real problem at hand.

"Maybe a student obtaining a weapon without the parent even knowing about it," said Kris Mills, Parent. "I understand what they are trying to do, but making us notify them if we have guns is not going to deter the behavior what makes people do what they do with guns."

Others say the parents that don't properly store their guns are the ones that wouldn't notify the school, making the law pointless.