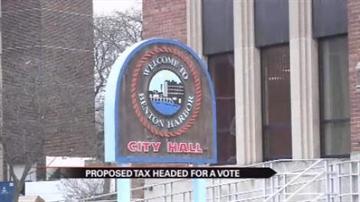 BENTON HARBOR, Mich. -- Monday night is the last chance for Benton Harbor leaders to make their case for a special tax. It's the same one rejected earlier last year that would pay for police, fire and other city services.

The special election is May 7th, so Monday night is the last open floor discussion about the tax .

All of this is part of the Vote Yes to Move Benton Harbor Forward campaign.

The mayor and commissioners say they feel it may have been shot down in November because people didn't understand what they were voting on.

So this time around, they are trying to answer all questions and make sure people know that passing this proposal will bring over $1 million into the city's budget just in the first year.

“We can present a budget to the commission that goes five years out, so we can start preparing a vision for this city to not always have to worry about the next financial emergency. So this special election will go a long way when this proposal passes,” said Tony Saunders, Benton Harbor’s Emergency Financial Manager.

Saunders says one thing he wants to make clear is that voting yes on this tax will eliminate the special assessment that is in place. Residents won’t have to pay both.

The meeting is at 6 p.m., April 29 at Benton Harbor High School in the Performing Arts Center.