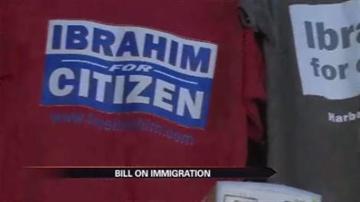 HARBERT, Mich. -- US Congressman Fred Upton introduced a bill last week that would grant permanent citizenship to an immigrant who has been living in Michiana for years.

Ibrahim Parlak was born in Turkey. He came to the US in 1991 seeking asylum.

His case attracted national attention nearly a decade ago when Homeland Security accused him of having ties to terrorists – but he was cleared of those accusations.

"I have been in this country for 22 years and this restaurant has been here for 20 years.-And when this story started my daughter was six years old and now my daughter is 15 years old,” said Ibrahim Parlak.

Parlak, the owner of the Cafe Gulistan, says one thing is still not resolved. He is fighting to stay in the US permanently.

He says the government keeps granting him renewal clearance to stay in two year increments.

"That's been a process of regular process for the last 10 years. It's been introduced it's the fifth time,” said Parlak.

Just last week Congressman Fred Upton re-introduced a bill that would keep Parlak in the US permanently.

Senator Carl Levin has introduced a similar bill in the Senate .

However-- the Kurdish immigrant isn't optimistic it will pass.

"Yes we are hopeful, but you know we keep dealing with the same thing over this one,” said Parlak.

He says the microscope he has been under since 9/11 has proven his character as clean.

He says it has been difficult to grow his restaurant business.

He has a message to send to legislators that could one day be voting on his permanent residency bill.

Parlak ended up on the government’s radar by admitting he was part of the Kurdish freedom movement in which the US government believed to have ties to the  PKK. The PKK was added to the terrorist watch list after in he was in the country.