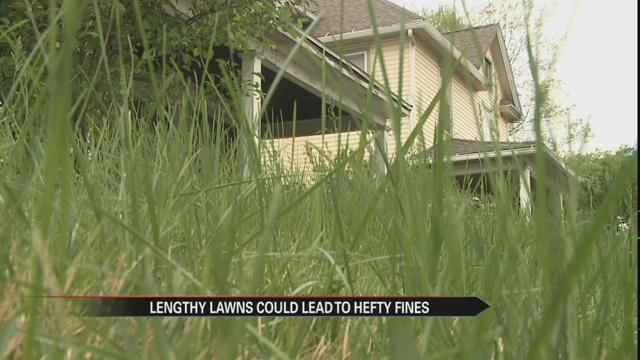 South Bend's Common Council is reviewing changes to the city's tall grass ordinance and these amendments could mean harsher fines for messy yards.

Residents along Allen Road say the beautiful neighborhood is no stranger to un-groomed yards.

They hope these fines could help violators on this block get their acts together.

“My lawn mower even broke down," said resident Frieada Barnes. "I had to buy my neighbor's lawn mower to cut it.”

Barnes is a proud, longtime resident of this neighborhood, and she tries to maintain her yard regularly.

But neighbors say beautiful homes like Barnes' can be overshadowed by unkempt yards just down the block.

“Let the homeowners get out here and take care of their properties, everybody else seems to be," said resident Allen Wheat. "Look around, people want to keep their neighborhoods cleaned up.”

But some residents say its too much.

“That's ridiculous, especially when you can pay someone something entirely different to keep that from happening.” said resident Lorenzo Jackson Sr.

Others say if you neglect your yard, you deserve to be charged.

“They got to step up, make them get out there," said resident Terry Johnson. "We had to do it, they got to do it.”

The proposal was sent back for review in Monday's Common Council meeting.

For now fines will stay the same as they have been.

The Health and Public Safety Committee will discuss the changes to the ordinance Tuesday, May 26.

If favored, the ordinance will go up for public comment on the same day.