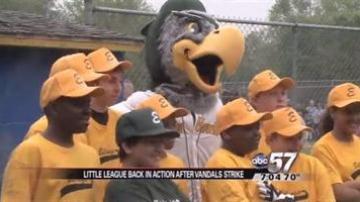 There's no crying in baseball. But it certainly was no laughing matter in Elkhart, when bad guys took almost all the equipment and did a lot of damage to the FOP Little League. But a big last inning rally of support saved the day, and this morning it was batter up!

The community raised almost $7,000 in donations and equipment, and by looking at the field you would never know it was vandalized.

But two months ago that was a different story. Vandals damaged the concession stand, and stole nearly 80% of the league's equipment.

"We rose from almost dead today and now we get to play baseball and in the summer that is the best thing you can ask for" said Bishop Christensen.

One of the biggest donations came from the South Bend Silver Hawks. The team "swooped" in to save the day. The Silver Hawks donated three bags of hats, bats, and catchers gear, and Christiansen says the community support has been overwhelming.

"We actually got more than enough equipment to outfit all our teams. More than enough to help take care of some of the important needs we've been lacking. Basically everything in the facility is updated painted and repaired" said Christensen

Thanks to the communities big save, today was all about playing ball. Players and coaches say it's the best the fields ever looked.

"We got to go to a lot of other fields and ours didn't look that great, so I think we're finally catching up to the other fields" stated Elkhart Stingers player Cane Michale.

His teammate Andrew Cherry said, "They got all the fences fixed up and everything and there used to be bumps. The fence used to be broken and they fixed the dirt, fixed the weeds, pulled them out, and got sponsor's."

Now with a better field, new equipment, and a fixed concession stand, there's only one more thing left to do.

And his teammate had the right idea.

The Elkhart Little League has 110 players that make up 11 different teams. And their ages range from 4-14.

The league does need volunteers. If you want to help out call 574-293-1399 or email ElkhartFOPLittleLeague@yahoo.com