LGBTQ Center works to promote equality for all 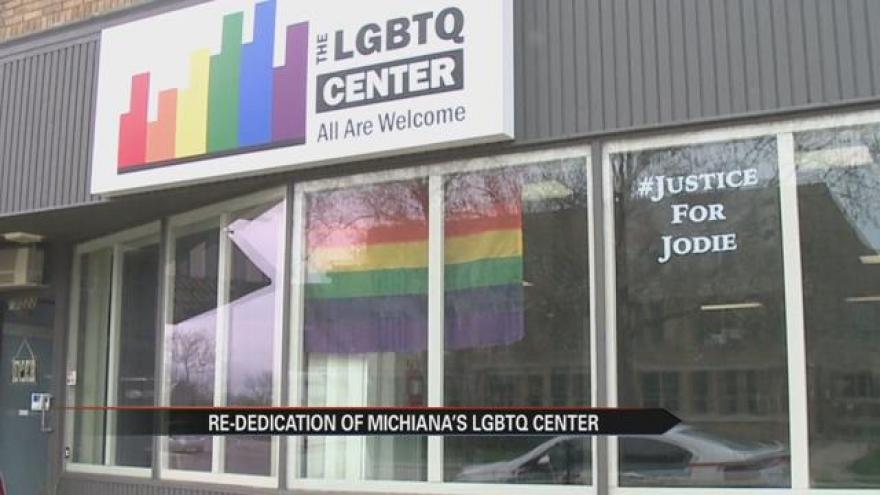 A countdown, quick cut of the ribbon, followed by a round of applause.

Just like that, the new LGBTQ Center was born again, releasing a new name, mission statement and logo to name a few.

Inside the Mishawaka Avenue center, South Bend’s Mayor and a variety of community leaders shared the impact it is having on Michiana.

The center reports 41% of transgender people attempt suicide at some point in their lives.

So it serves as a beacon of hope, a support system, for a vulnerable group within our society.

“I think it’s going to help us address things like youth suicide before it happens and also send the message that violence against anybody for any reason, but especially for who they are, is not acceptable in this community,” said South Bend Mayor Pete Buttigieg.

Forrest is the mother of an openly gay, south bend veteran, Jodie Henderson.

Henderson was murdered earlier this year.

Her emotional speech captured the attention of everyone in attendance.

“They’re reaching out more than my own family is and I appreciate it,” Forrest said.

A large sign that reads “Justice For Jodie” is posted on the center’s front window.

“I didn’t think this day would ever come and when I see a sign like this I know justice is coming,” Forrest smiled.

Mayor Pete Buttigieg said this center is saving lives and he is proud of the work it is doing.

“We have a community of people who clearly care. And they’re sending a message that says everybody has a place,” he explained.

“I see maybe 100 people coming through our doors every week so there is a great need for it in this community,” she said.

But everyone acknowledged their work is far from over.

Mayor Buttigieg, along with Henderson’s family and staff at the center, is hoping the general assembly considers passing a hate crime law in Indiana.

“I think it is a little embarrassing that we are among the very last states in America to have some kind of hate crime provisions,” the mayor said.

Henderson’s sister, Lucille Henderson Benton, is now working to get signatures on a petition to pass a hate crime law in the state.

You shouldn’t be afraid to walk down the street or go to a bar being openly gay, lesbian, or transgender.

The center hosts several monthly support groups including a youth and transgender group to name a couple.