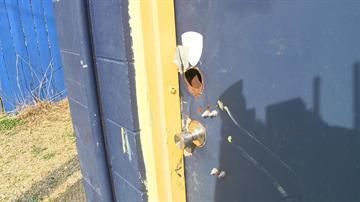 ELKHART, Ind. – The Elkhart F.O.P. Little League is short handed just days away from its 2012 tryouts, and you can help!

After a break-in last November, which totaled almost $10,000 worth of stolen property and damage, the league is just trying to get all the equipment it needs to start the season.

“It’s not like they really tried to take anything. As much as they tried to destroy everything,” said League Vice President Jeff Chaney.

Chaney played on the fields as a kid. He said to see this kind of destruction happen to a place that means so much to the almost 150 kids that use the fields every summer is tough to swallow.

“It’s almost kind of personal. It is when you poured a lot of work and a lot of your heart into it just seems like it’s a real slap in the face for somebody just to do,” said Chaney.

Little League President Bishop Christensen said the complex gets vandalized every winter, but this year it’s been worse.

Windows were broken, door knobs knocked off, stereo and baseball equipment is stolen, and that’s not all.

“They turned the water back on, froze and broke all our pipes and now we don’t even have a bathroom facility,” said Christensen.
He said the community is stepping in to help, and now you can, too. The South Bend Silver Hawks are holding a donation drive for the league. You can drop-off donations at the centerfield box office Monday – Friday 10 a.m. to 4 p.m.

If you donate $10 or any gently used baseball equipment, you’ll get two tickets to watch the Silver Hawks play the Dayton Dragons on April 14.

The Little League said it’ll take anything you have to offer, but it especially needs catchers’ gloves, helmets, spare gloves and bats.

“We just want to be down here to see little kids play baseball. We want to give them every opportunity we can to help them excel,” said Christensen.

There is also a list of the items the league needs at Play It Again Sports on South Main where they have a list of items they need. The Silver Hawks’ Stanley Coveleski Stadium is located at 501 West South Street, South Bend, Ind.

The final deadline for Little League registration is March 24.

Tryouts are Saturday from 10 a.m. to 1 p.m. at the Elkhart Sports Center.