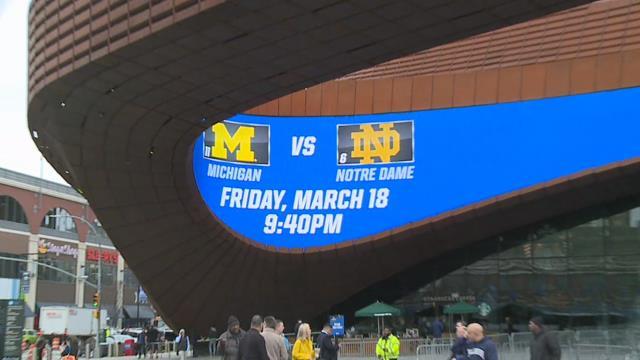 The Notre Dame men’s basketball team tips off against Michigan at the Barclays Center in Brooklyn Friday night.

The upperclassmen are really playing a key role in this team's success.

If this team is to advance in this tournament, it’s not only the senior leadership of Zach Auguste that will play a key role – but the play of junior guard Demetrius Jackson, as well.

While his future at Notre Dame is uncertain one thing is for sure, Jackson is the floor leader for the Irish and will dictate play against Michigan.

"He’s going up against a bunch of good guards. Irvin, Walton, Robinson – so the real challenge for Demetrius and Steve Vastoria," said Prister.

The last time the Irish took the floor it was ugly - a 31 point loss to North Carolina in the ACC tournament.

"It was easy for us to put it past us because of how much we lost by and we buried that one quick," said Jackson.

If Notre Dame is to survive and advance in the east region – Jackson knows he has to elevate his game.

"But at the same time we tried to learn some lessons from the game and work on some things we could have done better in that game and use that going forward," said Jackson.

"The main thing he needs to is stop the run of turnovers. They’ve had 35 in the last 2 games and that’s very atypical for Notre Dame," said Prister.

Talking to Jackson this week, he is focused and knows this team is capable of making a deep run in the tournament. It’s just about efficiency with the offense. And that starts with him.

Friday night's game is the 23rd time Michigan and Notre Dame play each other. Michigan leads the series 15-7.