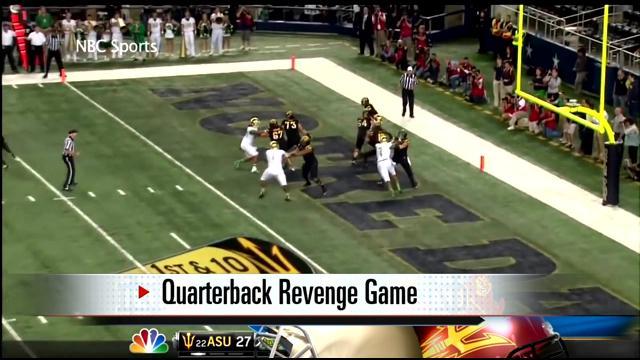 Arizona State has the home field advantage in Saturday's game, which could be difficult for Notre Dame to overcome. The last time the two teams met, fans were on the edge of their seats through the end.

Both teams are ranked in the top 10 of the new college football playoff rankings.

The Irish, led by Everett Golson, are trying to keep their post season hopes alive, while the Sun Devils are trying to get revenge for what happened last year.

"It's a huge payback for us, for myself, and for the guys. We were just so close in Dallas," said Taylor Kelly, ASU quarterback.

During the last matchup, ASU made it back to the end zone with 11 seconds less, but the last second touchdown didn't give the Sun Devils enough to win. They lost 37-34 to Notre Dame.

That feeling of defeat hasn't really worn off in the southwest.

"To have them back here with our fans it's going to be a great game," said Kelly.

If the last matchup is any predictor, this year's matchup should be a nail biter.

"It's fun to always play a team like that," said Kelly.

The Sun Devils are coming off a win over Utah.

"I didn't even know we were top 9. My mom sent me a picture that we were in there. We're just keeping that focus in your school work and everything you're doing and it'll pay off on Saturday," said Kelly.

On the Irish side, quarterback Everett Golson is coming off an impressive school record -throwing for 3 - and passing for 3 touchdowns against Navy.

He's still trying to make a statement with his team after the sting of the last minute Florida State loss.

"It's definitely a big game but I think even Navy was a big game I don't think we put any game over another," said Golson.

While it's sometimes hard to shake off what went down a year ago, there's no question the game will be a tough battle for both teams.

In 1988, Notre Dame won the National Championship in the Sunkist Fiesta Bowl at Sun Devil Stadium.