Live in Tempe: Freshman stepping up to replace Schmidt 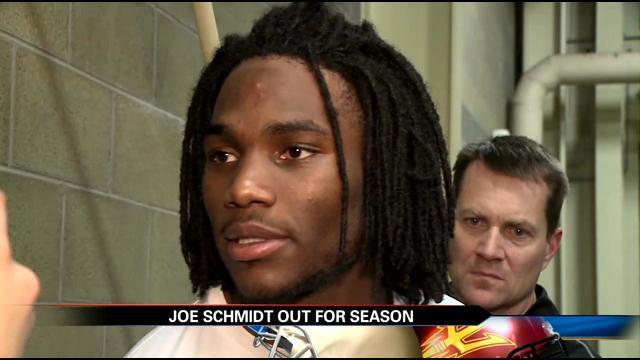 Notre Dame's defense was dealt a blow during the game against Navy. Linebacker Joe Schmidt fractured and dislocated his left ankle. Now the team has to face a strong opponent without its lead tackler.

Head Coach Brian Kelly says Schmidt wasn't just lead tackler with 65 tackles in the season, he was also a vocal leader for the Irish defense.

Kelly says it's time for some of the younger, more inexperienced players to step up on the defensive side of the ball.

The list of Irish linebackers is a little shorter.

“It's Jaylon, it's Onwualu, it's Greer Martini. That's what we've got," said Kelly.

Schmidt dislocated and fractured his ankle in the third quarter of last week's game against Navy.

“Joe was able to put himself in the right position," said Kelly.

The Irish will look to freshman and USA Today First-Team High School All-American Nyles Morgan to fill the void.

“He's fast, he's athletic, strong. I mean, he has all those traits that allow him to play the position and make up for maybe the lack of recognition that Joe had," said Kelly.

Losing Schmidt also means losing a leader on the field.

“From a leadership standpoint it puts a lot more on me,” Jaylon Smith. “I'm up for the challenge but I really just have to understand that it's going to be a different voice out there talking to me, out there talking with a freshman."

“A very exciting player, reminds me a lot of myself as a freshman, really not knowing much but having great athletic traits and really coachable,” said Smith.

“I think we said to him about three weeks in, you're either going to quit or you're going to be one of the best players that's ever played here, because we're hard on him, I mean really hard on him. And he just keeps coming back asking for more," said Kelly.

Morgan is Notre Dame's highest-rated recruit from the 2014 class.

Morgan will step into the middle linebacker position for the rest of this season. Schmidt is out for the season.