Live in Tempe: The game that almost wasn't 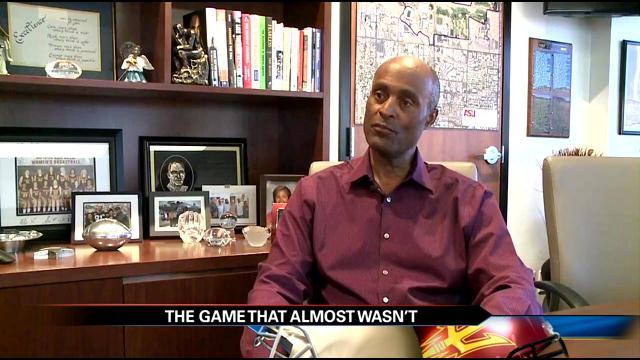 The game between Arizona State and Notre Dame almost didn't happen. ASU's Athletic Director explained what it took to keep the game alive.
Both teams want to win to keep their name alive in the college playoff conversation.

“Strength of schedule matters so whichever team prevails, they will be in the national conversation undoubtedly, and that's exciting," said ASU Athletic Director Ray Anderson.

Last year, the Irish wanted out, citing its commitment to play five ACC games a year, claiming they didn't have room in their schedule.

“When we contracted, we expected that the other side would fulfill their obligations," said Anderson.

Anderson wasn't athletic director then. His predecessor Steve Patterson refused to back down.

“We had to exert unfortunately some of the skills of our lawyers to make sure that this event happened," said Anderson.

The Irish didn't want the fight.

“Now here we are in Tempe, Arizona, Saturday night national TV, big game for both universities. I would hope that at the end of the day that's a good result, at least for all the fans of both institutions," said Anderson.

In order to make this game happen here ASU canceled a game scheduled down the road in 2017.

Anderson says for the sake of football fans everywhere, he's glad it all worked out and expects this weekend to be a huge boost to Tempe's economy.