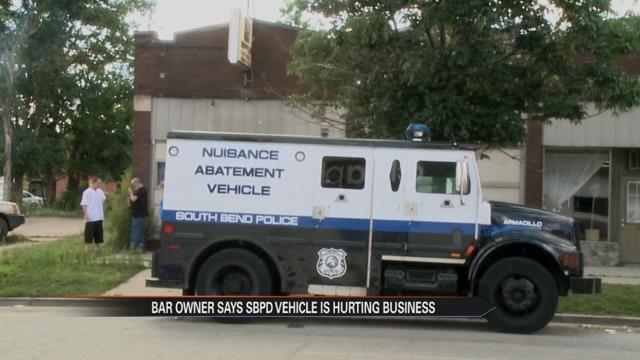 "They parked this armadillo out the front door and people are scared to come in and drink because its causing problems," said James Ford, the Owner of Ripples Bar and Grill.

After a rash of shootings and crime on the south side of South Bend, 24-7 police presence was called in to help the community and keep residents safe.

A Nuisance Abatement Vehicle, known as the Armadillo, has been parked outside of Ripples Bar and Grill on Michigan Street.

"It took be down to almost nothing. I have very little business,” said Ford.

Ford says business has nearly vanished since the South Bend Police Department Armadillo has been parked in front of his business.

Captain Robert Hammer is with the South Bend Police Department.

"We are there to support, protect and a have a peaceful presence for everyone. We use it in neighborhoods and areas where there are quality of life issues and up ticks in crime. So if people aren't coming, he probably would want to ask himself, why do they not want to be around when there's police presence. “ said Captain Hammer.

Ford is still trying to figure out why the police department is singling him out.

"Only thing I can think of is they are trying to harass me. It should be down along the corner," said Ford.

So how long will the Armadillo stay there?

"We take a lot of things in to consideration. Recent crimes, an uptick in crimes and quality of life issues are driving factors in that decision," said Captain Hammer.

If you see the Armadillo in your neighborhood and are curious why, contact the South Bend Police Department.