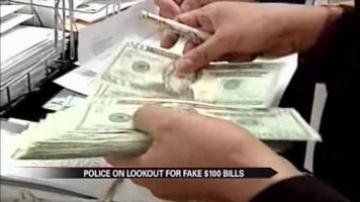 SOUTH BEND, Ind. -- There's only three days left until the biggest shopping day of the year and now South Bend police have a warning for both stores and shoppers.

Counterfeit $100 bills are popping up at area Wal-Marts undetected.

Counterfeit bills are nothing new, but the quality of these fake bills is something police say they haven't seen here before.

With just hours until one of the biggest shopping days of the year, shoppers are on the lookout for good deals and local businesses, like the Corndance Tavern, say that means they will be busy too.

"People go out and spend money and then have to go somewhere to eat right. So, why not right here next to the mall," said Corndance Tavern manager Jim Bradke.

However, this year local businesses will be paying close attention to the money that is coming in this holiday season.

Police say the print was excellent and of a very high quality. They were $5 bills that had been bleached and reprinted to look like $100 bills.

Since it was still a real bill, the subtle differences were virtually undetectable.

"That was really surprising and I am surprised people are getting so innovative," Bradke.

It is nothing new, but police say these fake bills are surprisingly sophisticated. So much so that the bills even passed the marker test, which is why they are fooling cashiers so easily.

"That's definitely a concern. Especially for everyone. For anyone in this area, anyone that has to deal with money throughout this whole weekend," said Bradke.

Retail giants like Target, Best Buy and Wal-Mart have asset protection and security measures in place, which is how the fake bills were discovered.

However, for local businesses that do not have those resources, it is be much harder to detect a counterfeit bill. That is why Corndance Tavern say it is already devising a plan to spot these bills this holiday season.