Local businesses help in the search for Alma Del Real 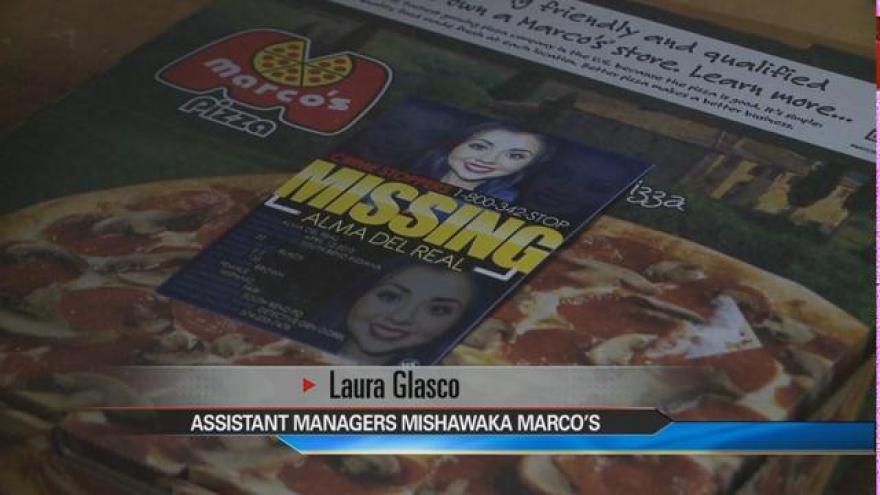 It has been two weeks since 22-year-old Alma Del Real went missing after leaving a nightclub with a friend.

Search crews have not given up hope, and now Michiana businesses are joining in on the search.

If you order a pizza from Marco's Pizza in Mishawaka, you'll get a little something extra on top.

Marco's Pizza is putting a flier of missing South Bend woman Alma Del Real on each pizza box that goes out the door.

Kroger on Ireland Road in South Bend wanted to do their part as well, so they began handing fliers out to customers.

"Kroger, several Spanish radio stations, just everybody's out there just trying to help," said Amber Rodriguez, a family friend. "When a business volunteers to step in and help, it kind of puts a lot more impact."

Rodriguez says she has worked tirelessly to get the word out there.

"It reaches a lot more people, especially something like Marco's who deliver 100 pizzas a day. Just getting Alma's picture out there to everybody is really what we're trying to do," said Rodriguez.

Rodriguez says she's hoping it's the extra help from these businesses that can help bring her friend home.

The "HELP FIND ALMA DRG *MISSING*" page on Facebook has gained a national following of almost 20,000 people and many are posting to and sharing the page in several states, including Kentucky, Texas, and Illinois.