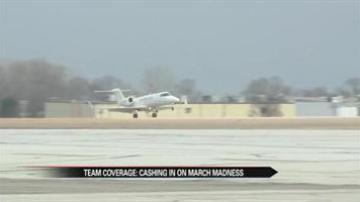 According to Atlantic Aviation's Customer Service Manager, their private airport was hopping on Friday night.

Christi Peterson said, “We had an aircraft that came in from Oklahoma that was a mixed plane. We had Notre Dame alumni as well as Oklahoma alumni on the aircraft who were coming in for the weekend to enjoy the basketball game.”

Peterson said the Women's NCAA Championship Tournament is helping the local economy in more ways than one.

"We have sold out most of the local hotels in the area because we book most of the reservations for the crews as well as the passengers that are coming into our facility,” Peterson said.

Ivy Court Inn and Suites by Notre Dame was sold out for the weekend.

Their Director of Marketing said this is the busiest weekend they've had in months.