ST. JOSEPH, Mich.—Local businessman Carl Meyer is taking to the bluff overlooking Silver Beach to honor those in uniform, both past and present.

Meyer, the CEO of Michiana Land Services, got the idea for the project while driving through Stevensville.

“I noticed that they had banners up on wrestlers and athletes and I thought why can’t St. Joe honor the veterans, the police and the fire department with banners,” Meyer said Wednesday, on what would have been his father's, a U.S. Navy veteran, 96th birthday. 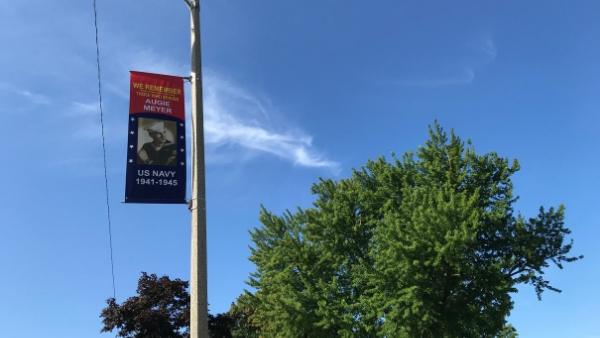 Meyer worked through the city’s approval process and last week, the banners officially went up.

“You’re humbled when you read some of the responses from people who have submitted information about the person they’re requesting to put up,” Meyer said.  “These individuals are ones that sacrifice and their families, sacrifice for us to protect us, serve us, and keep us safe.”

Every two months, the banners will be switched out to honor others who have served in the military as well as for fire and police departments. Currently, there are 14 banners hanging on the bluff.

The banners are completely funded by Michiana Land Services and will be up from April to November each year moving forward.

Meyer’s neighbor, Shirley Zych, was surprised to see a familiar face atop the bluff overlooking Silver Beach: her husband’s.

“I am awestruck,” Zych said. “When Carl called and said we’re going for a ride we’re going to see something downtown and then he showed me that his banner was up. Well, naturally, tears came to my eyes and I couldn’t talk for a while it really meant so much to me to see him honored in that way.”

Zych’s husband Walter served in the U.S. Navy during the Korean War. She hopes that visitors and locals alike will take a few moments when they’re walking along the bluff to remember those who have served.

“I think it was very much needed especially now, when there really isn’t that great love for our country and maybe this will help to bring it back. Him [Meyer] doing this project to honor our servicemen, maybe they’ll be thanked more often for their service,” Zych said.

Families and friends of veterans, as well as police and fire personnel, can submit their loved one’s information for the banner, which includes information such as their name, dates of service, and what they served in (the Navy, fire department, etc.) and a photo.