ELKHART COUNTY, Ind.—Shepherd’s Cove, a local clothing pantry, is hosting a Name Your Price Garage Sale on May 5 to raise enough money to keep the doors open.

Out of a donated building in Elkhart, Shepherd’s Cove provides the Michiana community with clothing, household items, shoes, toys, books and more.

When they first set up shop in the building, Shepherd’s Cove was told the roof would need replacing in about five years.

“But that was when we had real cold weather and that just aged it instantly. It was literally raining inside,” Executive Director of Shepherd’s Cove, Sharlee Morain, said.

Morain said the organization had 15 to 20 totes in each room collecting rain water. 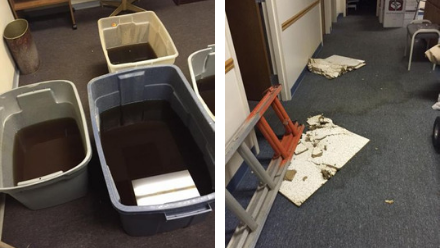 Photos of the damage at Shepherd's Cove.

Luckily, a local business offered to loan Shepherd’s Cove the money needed to repair the roof, which cost about $104,000.

To raise the money, Shepherd’s Cove, located at 347 W. Lusher Ave., is hosting a Name Your Price Garage Sale on May 5 from 1 p.m. until 4 p.m. Community members can come in, shop carefully selected, “eye-catching” items along with the regularly stocked items, and pay what they want to.

Morain says that if the loan isn’t paid off by December, Shepherd’s Cove will have to close.

“We don’t want to see the Cove shutdown, so we really need people to step up and help us get this paid off so we can keep the Cove going,” Morain said.

Frances Dossey used to shop at the Cove often. She picked up clothing that otherwise, would have cost too much money.

“It’s cheaper than buying clothes, especially for kids, as fast as they grow,” Dossey said.

Dossey is now giving back to Shepherd’s Cove. She started volunteering there on Thursday.

Shepherd’s Cove is always looking for more volunteers as well as donations.

If you cannot attend the May 5 event, you can help in other ways be checking out their Facebook page.

One big thing that Morain says Shepherd’s Cove is in need of is children’s clothing.

Take a look at the photos below for a sneak peek at some of the items set aside specifically for the Name Your Price Garage Sale on May 5.