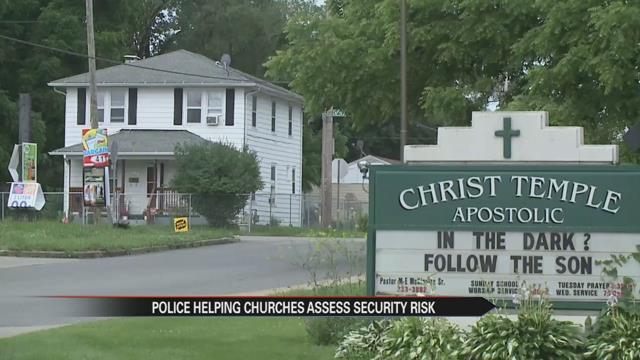 A program through the Crime Prevention Unit at the South Bend Police Department helps churches fight crime that might come through their doors.

In the wake of the Charleston church shooting where 9 people were killed, police believe it's important for churches to have security assessments.

Scott Ruscowski, the Uniform Division Chief at the South Bend Police Department, said they take calls from local church leaders about crime in their neighborhood regularly.

Ruszowski said, "Everything from a barking dogs to home invasions in the neighborhood.”

The task force specializes in security assessments and one of the churches who participates in the Church Watch Program said it's a great success.

Jim McKinnies said, "We lock our doors except for the main entrance. And then we have people that are stationed back there just to greet people."

McKinnies is the head of security at Christ Temple Apostolic and it is located on South Bend's west side near the corner of North Olive Street and Elwood Avenue.

McKinnies said, “If someone did come in, they gave us tips on how to alert the congregation that is something is wrong. They gave us code words to say.”

Police said their job is to "harden the target."

Lt. Patrick Hechlinski said, “We'll look at their doors, their windows, their lighting, their locks, their landscaping, we'll make security recommendations for them, we'll do personal safety talks, we'll come out and do kids fingerprinting.”

Lt. Hechlinksi is a part of the task force and he visits local churches for security assessments.

McKinnies said, “We haven't had any problems really here. Like I said we're being proactive. If something comes up. We hope we're ready for it.”