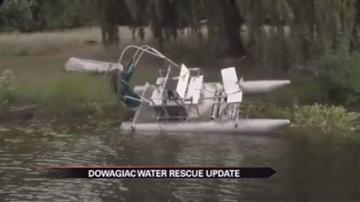 DOWAGIAC, Mich. -- A Dowagiac man is being called a hero after he rescued a family of four from Mill Pond after their boat capsized and left them stranded with no life jackets.

“My mother in-law called, Eleanor Davis, she called and said she heard there might be a drowning going on out here so my wife gathered up the kids and we went looking,” said Rick Okonski.

Sure enough, Okonski’s mother-in-law was right.

A family of four, including an elderly woman was stranded without life jackets after their boat flipped over.

“We were trying to go against the current and the weight was unevenly distributed and our boat just flipped over,” said Rick Gunn.

“I seen the pontoon flipped over and then I realized I knew who it was. It was our neighbors across the pond and it did not look like anyone could swim,” said Okonski.

Okonski picked up a few firefighters from the Wayne Fire Department on his boat.

“They yelled at me to come pick them up,” said Okonski.

Then he took them over to where the family was hanging onto the boat.

“They did all the lifting,” said Okonski.

The firefighters lifted the four people out of the water onto Okonski’s boat.

According to Dowagiac police, the victims were in the water for at least a half hour and Okonski says they were not in great shape when they found them.

“She was looking desperate. She was very scared. From what I saw, she was barely out of the water just hanging on,” said Okonski.

Okonski drove the family over to emergency crews where they were checked out and are doing just fine.

He says he is relieved everyone is okay and happy he could help.

“We help anyone we can. We look out if somebody is stranded. We help them out,” said Okonski.