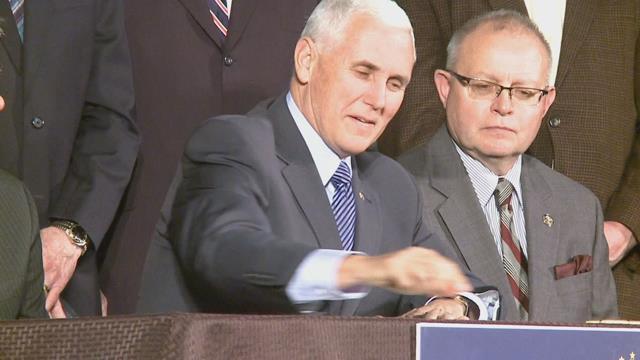 On Wednesday Governor Mike Pence was in Goshen for to sign off on $42 million to be used in St. Joseph, Elkhart and Marshall Counties.

In February many were wondering ‘how much money would be approved for regional cities?’

After Wednesday’s ceremony, securing million dollars to the North Central Region of Indiana, the questions became ‘How will the money be spent?’

“This isn’t some effort by the state of Indiana to do planning. This is by the people of Indiana on a regional basis and they will decide where the dollars go,” says Governor Mike Pence.

The point of the initiative is to create a community that attracts young talent and adds amenities to three counties St. Joseph, Marshall, and Elkhart.

“It’s about making this area attractive to people to come and work and live and play,” says John DeSalle who is on the Regional Development Authority.

The RDA will decide which of the 39 projects, which total around $1.1 billion, get some of the $42 million.

“In the next six to eight weeks we will review the projects the applications. So it’s really out intention that we select a really good project,” says DeSalle.

Project leaders will begin submitting application to the RDA for RCI funding.

Guidelines for project applications not only include falling in line with the Regional Cities vision but 80% of the funding must already be secured.

Before applying for RCI money 20% of the funding must come from public sources and 60% from private investors.

Some projects like the Community Natatorium & Fitness Center in Elkhart are further along in planning there are other projects on the list that are fairly new.

“But they are still worthwhile projects and we are going to reserve funds, allocate funds for those projects to be used at a later day,” says DeSalle.

DeSalle expects funds to be used up in the next two years.

Jeff Rea with the St. Joseph County Chamber of Commerce says he is not worried about where the funding goes.

Through his experience of working with the Regional Cities Initiative he says everyone seem to be rooting for one another.

Only the 39 projects submitted in August are in the running for RCI money.

DeSalle says in about two months some projects will begin breaking ground.