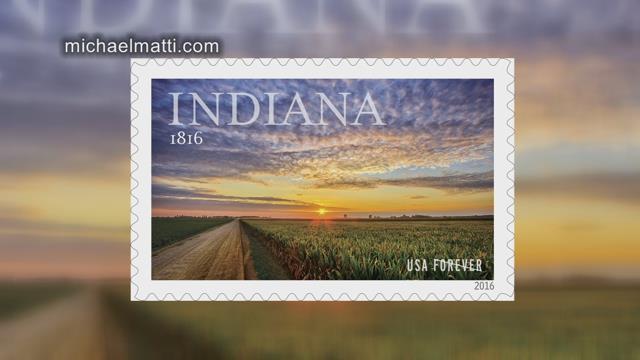 One of Michiana's own local artists is helping to commemorate Indiana’s bicentennial.

Millennial photographer Michael Matti was in the spotlight today with Governor Mike Pence at the Indiana State House where they dedicated Indiana's statehood Forever stamp.

The stamp features a beautiful sunset, overlooking corn fields on a dirt road on Indiana State Road 15 in Kosciusko County.

The photograph was taken when Matti was still in college three years ago.

Matti said he’d driven past that spot in the road hundreds of times, but that one day in July, he decided to stop, jump on the roof of his car and grab the shot that is now making history.

The historic photograph was taken just south of Milford, where Matti grew up. The shot is a blend of three photos taken in rapid succession at different exposures to capture details near the bright sun as well as in the shadows of the corn.

The three photos were merged and blended together in Photoshop to create the final image.

The young photographer tells us having his work chosen for the stamp is one of the highlights of his career.

“Seeing the photo come to life on the stamp has been an amazing experience. It's been a year and a half in the making. So, to finally see that come to fruition has been really cool,” says Matti.

Forever stamps are always equal to the value of a First Class stamp, so they can be used forever.